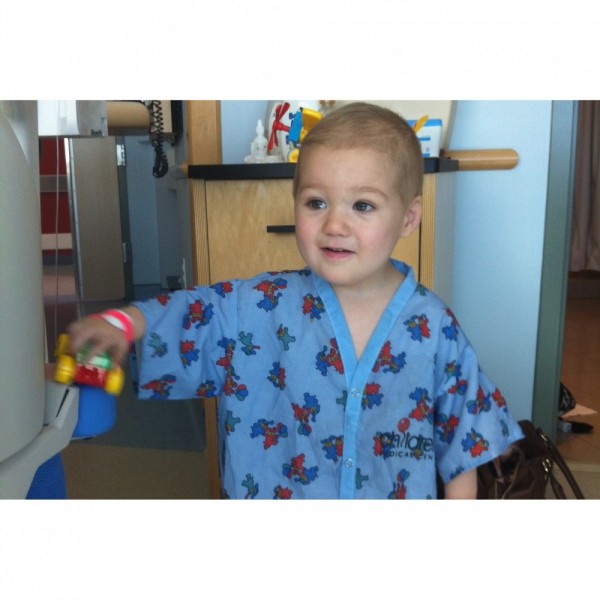 Thank you for supporting me and the more than 300,000 kids worldwide who will be diagnosed with cancer this year. By sharing the gifts of your time, talent and money with the St. Baldrick’s Foundation, you're supporting research to give all kids with cancer a better chance for a cure. Paxton was an unplanned pregnancy. The third child and a beautiful surprise blessing to our family. I was a busy mother of three, ages 5 and under. Paxton had just had his 18 month well visit with our beloved family pediatrician where he did a CBC to check for anemia as part of the standard well check. All counts were normal. He got an A+ on his well check "report card". Two weeks later, he ran a low grade fever with a runny nose...no biggy. Then I noticed tiny bright red dots covering his body. They looked like broken blood vessels to me and my mothers instinct sent me spiraling into a nightlong anxiety frenzy. I awoke the next morning to rush off to the pediatrician, praying for a rational reason to dismiss the sickening worry that something more serious was wrong with my baby. Turns out that the myth about mother's instinct proved true in this case. His doctor took one look at him and ordered a CBC. All of his counts were way low, leading him to conclude with near certainty that Paxton had leukemia. The floor fell out from under me right there in the doctors office. We were sent directly to Childrens Medical Center of Dallas where it was confirmed that Paxton has Acute Lymphoblastic Leukemia (b-cell). Our world was rocked. How could this really be happening to us? Pax immediately was admitted and began chemotherapy. He was such a rockstar. After 9 days in-patient we were sent home with our son to start the long 3 1/2 year treatment haul that was our son's only hope for survival. We were told that if your child has to have cancer this is the one to have. It boasts an 85-90% cure rate. That was hard for me to process at that time, but looking back now, I get it. ALL had a 90% mortality rate in 1960. How lucky we are to live in a time where years' of cancer research and thousands of young beautiful lives lost, has yielded a statistic which has reversed itself. He has since battled blood stream infections during neutropenia (very scary for those not familiar with the cancer world), more pokes, spinal taps, bone marrow aspirations, tests, scans, toxic therapies, than I care to recall. Throughout this all he exhibited more bravery and resiliency than I can imagine someone so innocent and young possessing. He inspired everyone around him, doctors, nurses, friends, family and social media with his sweet smile and his ability to take everything we sent his way and pull through without missing a beat. By the end of the first month of treatment his bone marrow biopsy showed no signs of cancer. We were ecstatic to be cancer free. Now in September of 2014 he continues his maintenance therapy which still isn't easy, but it looks like a cake walk compared to the first grueling year of intensive treatment. Life is all about perspective. He now attends preschool, went to Disney World with Make A Wish Foundation, runs through my house playing and fighting with his brother and sister, and has a beautiful full head of hair. His healthy outward appearance and happy disposition belies all that he has endured. For that I am so incredibly thankful. We are thankful for everyday with our family and continue to work to live with the nagging worry that always plays in the background of every family affected by cancer. I have resolved myself to a lifelong dedication to funding cancer research that provides us hope for cures to all forms of pediatric cancer.