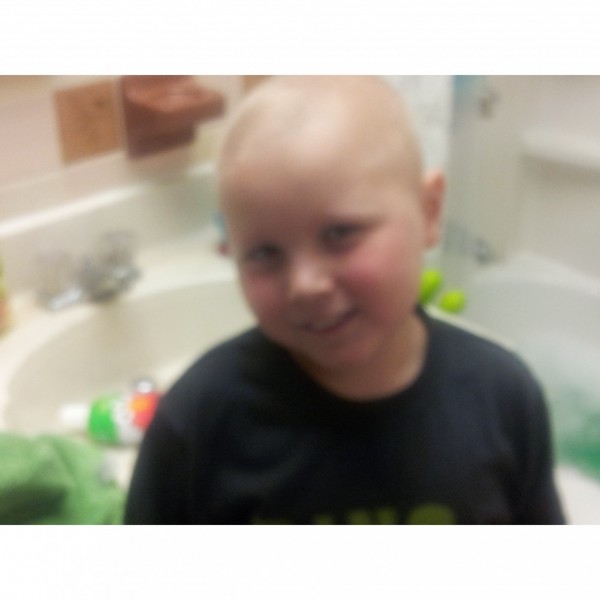 Thank you for supporting me and the more than 300,000 kids worldwide who will be diagnosed with cancer this year. By sharing the gifts of your time, talent and money with the St. Baldrick’s Foundation, you're supporting research to give all kids with cancer a better chance for a cure. Blake Pierce was diagnosed with Acute lymphoblastic Leukemia on March 26, 2012. Blake is a funny, caring and inquisitive 5 year old boy. In the beginning of March 2012 Blake was not acting like himself, he was tired all the time, pale and short of breath; he also presented with low fevers. After a few appointments to the doctors with no findings Blake’s mother asked if they could run labs. The doctor agreed that this would be a good idea and sent Blake for labs that day. When the doctor received the lab results he called Blake’s parents and told them that they needed to bring Blake to the hospital right away. Blake’s lab results showed that he had low platelets, and low red and white blood cells. Blake was admitted to the hospital on March 26th 2012. That night Blake received his first of two blood transfusions that he had during his hospital stay. It took the nurses four needle sticks to get an IV and while the blood was running Blake cried and complained that the blood was burning his skin. The next day Blake was scheduled for a bone marrow biopsy to see if he had cancer. The results of the bone marrow biopsy confirmed that Blake had Acute Lymphoblastic leukemia. Once the diagnosis was confirmed and Blake was scheduled to have a port placed into his chest so he could receive chemotherapy and blood products. Blake’s journey will be a long road but he will beat cancer. The treatment that Blake receives will be 3 ½ years long. Acute lymphoblastic leukemia (ALL) is a fast-growing cancer of the white blood cells. Lymphocytes are a type of white blood cell that the body uses to fight infections. In ALL, the bone marrow makes lots of unformed cells called blasts that normally would develop into lymphocytes. However, the blasts are abnormal. They do not develop and cannot fight infections. The number of abnormal cells (or leukemia cells) grows quickly. They crowd out the normal red blood cells, white blood cells and platelets the body needs. As well as a diagnosis of Acute Lymphoblastic Leukemia Blake also has a mild form of Cerebral Palsy called mild spastic diplegia. He has been receiving care at Shriner Hospital for Children since June of 2011. He wears braces on his legs to keep him walking flatfooted. Blake’s left leg is shorter that his right leg and he cannot do “normal” things that most of us take for granted. Blake is currently receiving physical therapy to teach his to walk up the stairs one at a time, balance on one foot and get up from the floor using no hands as well as stretch his legs. Blake wears leg braces during the day and night time boots to aid in the stretching of is legs. He is currently receiving Botox injections in his legs to loosen up his heal cords and help make walking on flat feet easier. Blake also sees a cardiologist, pulmonologist, dermatologist, psychologist, and an orthotic specialist. On top of all this Blake has to take several medications a day to combat the symptoms from the chemotherapy.