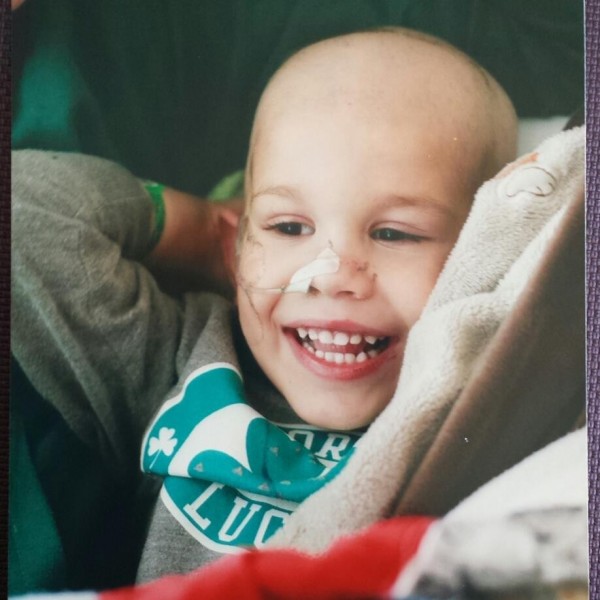 Elijah is the beautiful child of Chris and Crissy and the 3rd of 4 boys. To call him well loved would be an understatement. He was born not breathing and the oxygen deprivation caused a stroke shortly after birth resulting in brain damage that lead to a diagnosis of Cerebral Palsy around age 2. After lots and lots of therapy he caught up with his peers and his CP is almost undetectable even by his doctors. For the first time in his life he didn't have to go to weekly(or more) therapy appointments and was doctor free for 2 months. He was enjoying his medical freedom, then everything changed. On March 11, 2014 right before bed, Elijah complained of severe pain in his foot after dropping a toy on it, after looking it over myself I noticed it was quite swollen & painful to the touch. We were sure that it was broken. We called his pediatrician & described it to her, she agreed it sounded broken, and gave us the choice of taking him to the ER that night, or wait until morning to see his doctor. Knowing there was not much to do for a broken foot we opted to wait until morning to see our trusted pediatrician. The next day, on March 12th We dropped our older kids off at school and took Elijah to see his pediatrician. Once again she said it appeared broken, and sent us for X-rays, and asked us to return to wait for the results. It took us about 15 minutes & she was at the front desk waiting for us when we returned, Chris and I joked that it must be a pretty obvious break if the results came back that quickly. she took us to the room and said that it wasn't broken but that the x-ray showed an abnormality on the top bone & that we should pray that the bone was infected. She told us we would need to get blood tests done to check for infection & return for those results as well. It didn't take long to realize what "pray for a bone infection meant" the other options, must have been horrifying, After the blood tests came back infection free we were referred to an orthopedic surgeon for the next day. The orthopedic surgeon ordered more blood tests, ultrasounds, & MRI's; & we spent the rest of that week at the hospital getting those images. After the MRI we were called & informed that both a severe bone infection & something called "Ewing's Sarcoma" look the same on images and he needed a biopsy to find out which one it was, but that it was one or the other. The plan was to open his foot up take a small sample do a test to detect infections, if the test was positive she would remove the infection, close his foot then he would receive inpatient antibiotics for 3+ days. If the infection test came back negative, she would take another sample send it for an in depth biopsy to confirm, but we would unofficially know it was Ewing's Sarcoma, she would leave the tumor and wait for the results. On Monday, March 24, 2014 Elijah had a surgical biopsy of his left foot, & the infection test came back negative. We had to wait a week for the official results, but we knew. On Monday, March 31st the initial biopsy report came back confirming a cancerous tumor. Another sample was sent to the Mayo Clinic to confirm which type of cancer. We were referred immediately to an oncology team. They ordered CT scans, MRI's, PET scans, X-rays, bone scans, bone marrow biopsies & every other test imaginable, all to start & finish that week. The goal was to find out if the cancer had spread. we would meet back in a week to discuss the results and go over a treatment plan. On April 8th we met again with Elijah's oncology team, they confirmed what we expected, it was Ewing's Sarcoma, a rare childhood bone cancer. But it hadn't spread. He was to have Chemo for 12 weeks then a surgery to remove the tumor, possible radiation as a last resort if necessary, then several more weeks of chemo. The entire treatment will take approximately a year, with a possibility of longer depending on how his body responds. Elijah started Chemo on Thursday April 10th 2014. Please pray for Elijah, his brothers, & parents as we enter the fight of his life, where loosing is NOT an option. Elijah has been fighting for his life since his life began and we are not going to surrender.