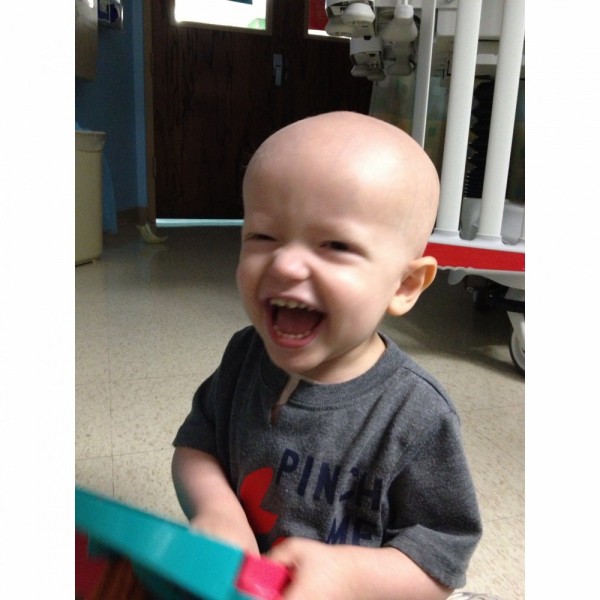 Thank you for supporting me and the more than 300,000 kids worldwide who will be diagnosed with cancer this year. By sharing the gifts of your time, talent and money with the St. Baldrick’s Foundation, you're supporting research to give all kids with cancer a better chance for a cure. Roman was like any other 2 year old until August 2013. He started acting a little sluggish which we chalked up to teething. His daycare provider had mentioned to us he was bruising more than he was falling but we didn't worry too much about that, he was a bruiser toddler. Then on August 11th at an arts festival in town I noticed spots on his legs. I thought it was an allergic reaction to something and since it was a Saturday we decided to bring him in to the doctor on Monday morning. When the doctor saw him and I explained what was happening the doctor suggested going to get blood work because the spots were not an allergic reaction but instead were petechiae (small burst capillaries that look like pinpricks). Before we left she called in another doctor for a second opinion and when she looked she sent us directly to the emergency room at Strong hospital/Golisano Children's Hospital (Rochester, NY). They believed he had some kind of blood disorder or virus. For the first 2 days at the hospital the doctors believed he had a virus called ITP. All his blood levels were normal except for his platelets which were dangerously low. They also mentioned a marker for cancer was elevated but they were convinced that was not relevant. He was treated with IVIG for the ITP and did not respond. His platelets continued to fall and abnormal cells began to appear in his blood. On Wednesday, August 14th 2013 Roman went in for a bone marrow biopsy. The doctors came to us immediately and said the sample was so hard to remove it was definitely leukemia. His bone was so packed with cancer cells they could barely pull a sample out. Later on it was identified as M7 AML. This is a treatment resistant for of leukemia that affects his platelets. They don't mature like normal cells. On Friday August 16th he has surgery to place a Broviac central line in his chest and began his chemo. His treatment was 4 rounds, around 30 days each of chemotherapy. The first 2 rounds were induction and the last 2 intensification. The chemo lasted for about 2 weeks each time with around 4 different chemo's multiple times a day. At the end of each round after the recovery period he would have a bone marrow biopsy and his spinal fluid tested (also chemo in his spine). He was inpatient for the first 2 rounds, 51 days total before we could bring him home the first time. He handled chemo amazingly and it never made him sick or brought down his spirits. He coped incredibly well with living in the hospital and the many medicines, fluids and transfusions he had to receive. Throughout his treatment he received around 40 platelet transfusions and around 30 blood transfusions to up his depleted body. The chemo eliminated his immune system and he was severely neutropenic (susceptible to infection and sickness for about 3 weeks following every round). He had 2 scares besides the treatment rounds where he had an infection in his Broviac and then a cold that had us all scared he would not recover. But he is a fighter and pulled through with a smile on his face. After every round we were all surprised that there was no leukemia found!!!! His last round ended in December 2013 and the day after Christmas he had his last bone marrow biopsy. He was and is officially in remission! We continue to do monthly blood tests and Outpatient appointments but so far he is doing amazing. He had his Broviac removed on St. Patricks day 2014. Now he is a crazy 4 year old with a huge smile and sense of humor. He is loving being outside and spending time with his little brother Ayden.