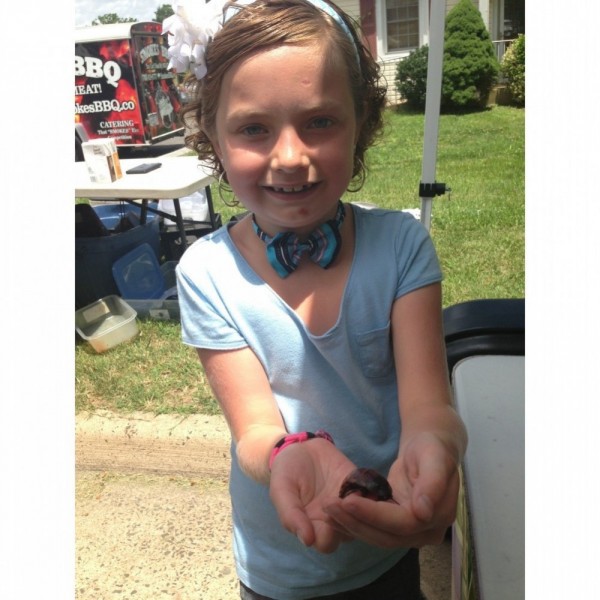 In the middle of September 2011, my then 7 year old, Ali, came to her mom and I complaining of pains in her legs. Being that we also had, Bash our 9 year old son tell of of similar pains in his legs around the same age, we assumed they were growing pains. We have never been so wrong. After we gave her children's Advil the pain subsided for a couple of days, the following weekend she woke up as normal, too early on a Saturday morning, got out of bed and fell straight to the ground in excruciating pain. She said her legs felt like needles were being poked into them. It was then we knew this we not growing pains and took her immediately to the emergency room on Fort Belvoir in Virginia. They advised us to get an appointment with pediatrics at Walter Reed in Bethesda. Her appointment was set for the morning of October 18th, 2011. Once we got there, they took 12 vials of blood from her to study. They told us what the possibilities could be and that alone scared us to our core. That afternoon on our drive home we got the call from her doctor that it was in fact Leukemia and they wanted us to come back that night to admit her into the hospital to start her treatment immediately. Now, a lot of people ask us, "why did you have them tell you over the phone?", knowing what the outcome could have been we didn't want to drive up back up there with the anticipation a diagnosis weighing on our mind. It was easier to hear it over the phone in a way. The doctors were not sure what type of Leukemia she had, so they sent her samples to Los Angeles. It came back a few days later as Chronic Myelogenous Leukemia (CML). We were informed that this was very rare, as it was found in men over the age of 60. She was in the hospital for a little over a week that October, her biggest worry, if she would be able to go Trick or Treating. Luckily, she spent only a few days in the hospital. That year, Ali spent Halloween in a wheel chair and was happy to have us push her around, up and down hills in her costume, to doors to get her goodies. (Especially her brother, he was very happy to have her home.) Her pill form chemotherapy was doing great until a follow up appointment January 2012. Her bonemarrow aspirate showed her CML had morphed into ALL and that she was in blast phase. The doctor prescribed her a stronger chemo regimen and a hoard of other medicines and ointments to keep her body in some sort of comfort. Her doctors informed us that she will need to undergo a Bone Marrow Transplant and as soon as possible. June 6, 2012 was the day of her transplant and after her 100 days of recovery she was deemed cancer free. She is only taking a small pill once a day and is scheduled to be off of that this June. Recently she has just started her immunizations over, as she will need all of them from when she was first born, due to the BMT. She is doing very well now and will be shaving her head this weekend, March 29, 2014, for her friend Ryan Raffel and other children that are fighting or are no longer able to fight for cancer research. Thank you for supporting Ali and the more than 300,000 kids worldwide who will be diagnosed with cancer this year. By sharing the gifts of your time, talent and money with the St. Baldrick’s Foundation, you're supporting research to give all kids with cancer a better chance for a cure.