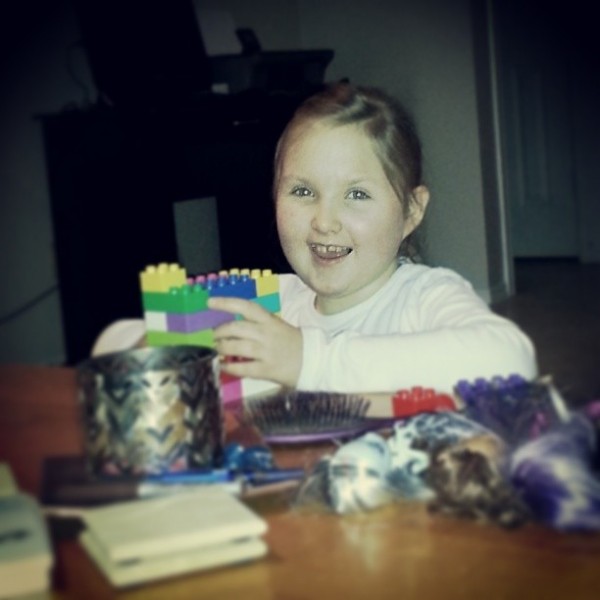 Thank you for supporting me and the more than 300,000 kids worldwide who will be diagnosed with cancer this year. By sharing the gifts of your time, talent and money with the St. Baldrick’s Foundation, you're supporting research to give all kids with cancer a better chance for a cure. Here's my story.... When I was 2 years old I was rushed to the hospital, my lips had turned blue and I was very lethargic. When we arrived in the ER they did a CTscan and found a mass in my brain. We were then sent over to St. Joseph's hospital, which specializes in Neurology and I was given an MRI. In the MRI they discovered a tumor in my brain and after the biopsy it was determined to be a Stage 4 Optic Pathway Glioma. They had also determined the reason my lips were blue and I was lethargic was due to a Petite Mal seizure which continued over the years. I started Chemotherapy treatment the following week. The first round was 14 months of Carboplatin & Vincristine. After a few months I developed an allergic reaction to the Carboplatin so I had to begin desensitization and would sometimes be at the hospital all day! I finished that round and was given another MRI after that, there was not any progress after this treatment so I had to start a new round of Chemo. I was given 3 more rounds of Chemotherapy drugs that were in the testing phase and none of these worked to decreased the size of my tumor. When I was 5 I started Radiation therapy, this lasted everyday for 6 weeks. After the radiation therapy was over, I was really tired all of the time and I was sensitive to heat. In March of 2009 I lost my vision due to the tumor and in May 2009 I had a mini stroke which resulted in loss of mobility. At the end of May, I had stopped eating, drinking and all I did was sleep. My mom was worried so she took me to the hospital and I was given fluids slowly because I was beyond dehydrated. After they were able to re hydrate my body I was given another MRI. In this MRI it was found that my tumor had grown 20%. I was immediately put into a hospice care facility and the doctors told my mom there was nothing more they could do. I went into hospice of June 2009 and my mom was told that I had 2 weeks left to live. Well, I beat the odds...after 3 weeks I started to drink, eat and liven up a little. Boy were the doctors surprised! I had people visiting me all the time; praying and singing. After a month and a half of being in hospice, the doctors reviewed the status with my mom and I was able to go home. The hospice nurses came to my house and checked on me once a week. After a few months I just started to progressively improve! I got my eye sight back, my mobility was better and my tumor had decreased in size. This was in 2009 and I have been doing much better since then with no seizures! My last scan showed no growth and I feel great!