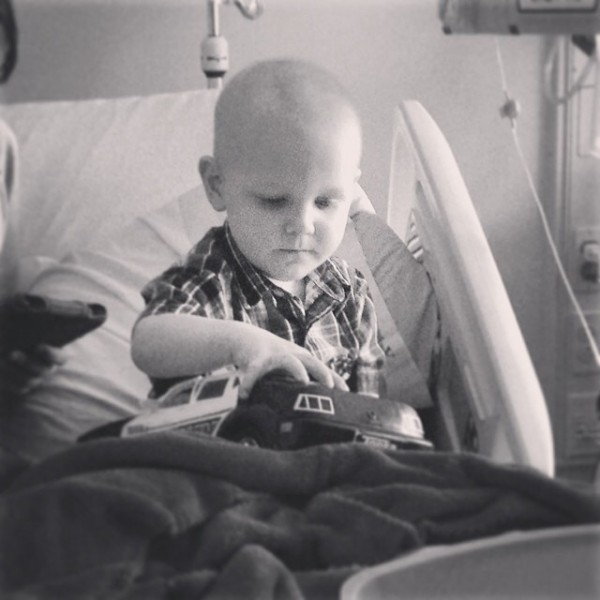 Paul was diagnosed with T-Cell ALL right after his 2nd birthday. He became a high risk patient on day 29 with disease still present in his marrow and testing positive for MRD. He continues to fight each day with an amazingly positive attitude. His smile and laughter is contagious and this diagnosis has not touched his spirit and personality. His fight has taught me, his mother, exactly how precious life is. It has also taught me how to be a stronger person. Paul went into remission on January 28th, 2014 but sadly only 3 short months passed and on April 28th, 2014 Paul relapsed in his bone marrow. This was the worst possible scenario for many different reasons; relapse in the marrow means the treatment did not work and he relapsed only months after achieving remission. His cancer was aggressive. On May 28th, after aggressive treatment, Paul presented signs of a morphological remission (bone marrow clean). 4 days later we traveled 7 hours from home to Long Island for a consultation with a bone marrow transplant doctor. The day before we got there Paul started to show swelling in his face. We proceeded witg the trip and returned home on Tuesday June 3rd 2014. The following day we went to the doctors for a spinal tap and chemo. We had a scheduled visit Thursday the 5th for more chemo. We arrived on Thursday to find out that Paul had not only relapsed in his peripheral blood but also in his central nervous system. We were at the end of the road with only two treatment options left. We tried one of the remaining options to try and get him into remission and get him to transplant. After two weeks of new treatment Paul still had 8% blasts in his peripheral blood. It didn't seem to be working. He became neutropenic and we were sent to the hospital with a fever. After being inv the hospital for only a few days the doctors came in and had "The talk". They told us he likely had 2 weeks to live. Over the next two weeks we continued to go to the doctors to be monitored. He continued to live. His counts started to return during the second week. On July 3rd Paul had 7,000 white cells (4,000-10,000 is normal) they told us we could try the final option when we returned on Tuesday July 8th. There was again hope! ! On Tuesday July 8th we walked into clinic for a spinal tap and scheduled chemo. After having blood taken we found out he had gone from 0% blasts in his peripheral blood to 69% blasts. In only a few short days Pauls cancer had again taken over his body. With a white count of 180,000 our options were no more. 9 days after our last day at clinic Paul passed peacefully, while sleeping with me (mom), at home on July 17th 2014. Thank you for donating, not just for Paul, but for the 300,000 other children fighting, cancer free, and those who have passed. Your money will go directly to pediatric cancer research and helping to find a cure for the leading cause of death in children.