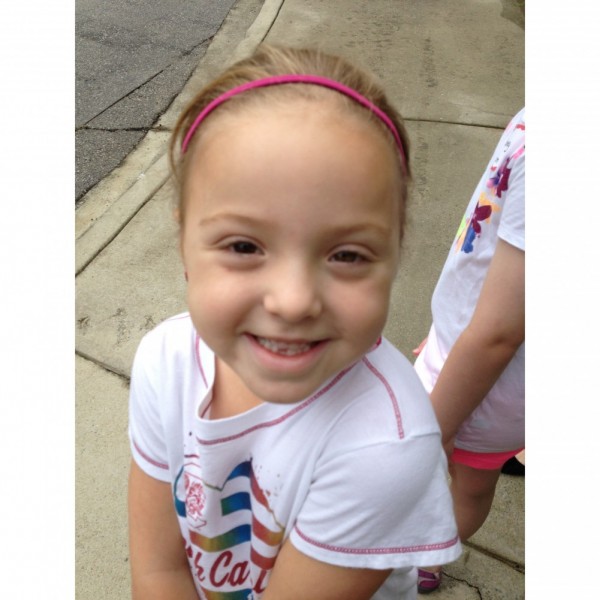 Madelyn Grace was born on September 20, 2006 at 3:30pm. She was a beautiful 7lb9oz baby girl with a head full of hair and the gleam in her Mommy and Daddy’s eyes. Madelyn was given a clean bill of health after the initial check up at the time of her birth. For 6 weeks we fumbled through figuring out what it was like having a newborn in the house, but she was beautiful and healthy, or so we thought. The day of Madelyn’s 6 week checkup, she woke up with a swollen left eye. We talked to our pediatrician about it and she claimed that it might just be irritated from an eyelash, so she cleaned it w/sanitary water and prescribed an antibiotic ointment. We used this over a week along with warm compresses 3-4 times a day, but there weren't any changes. We asked the pediatrician to see an ophthalmologist, which she then referred us. After examining her, he claimed she had a clogged duct in her eyelid. He too prescribed an antibiotic ointment and asked us to use it combined w/warm compresses 3-4 times a day for 10 days. We used the ointment and applied the warm compresses, but still no changes. We then went back to the ophthalmologist for a check up and he said it looked better (not to my husband and I) and that it would just clear up on its own, to give it some time. This just didn't sit right with us and our gut told us that we should see someone else. After talking to our pediatrician, we decided to try to use antibiotic eye drops instead of the ointment, because maybe the ointment wasn't getting in the eye enough. After 7 days, there were still no changes in the eye. We then asked our pediatrician to be referred to an eye specialist. She then referred us to the man who in my opinion saved our daughters life with the correct diagnosis, Dr. Edward Cheeseman. Madelyn was 8 days shy of turning 3 months old, when we first saw Dr. Cheeseman. After 20 minutes of seeing Madelyn, he diagnosed her w/Horner’s Syndrome which he described as a symptom of nerve damage leading from the brain to that side of her face. Typically, he explained, it is caused by damage during birth, but to rule out anything else, he scheduled us for an MRI on Friday, December 15, 2006. This is the day that will be ingrained in our brains forever. This is the day that changed our lives forever. Dr. Cheeseman had the toughest job I believe a doctor can possibly have. He had to come into the room where my husband and I were holding our sleeping 3 month old baby girl and tell us that there was a primary tumor in her top left chest and tumors in her liver. She had cancer, Neuroblastoma to be exact. We were given this devastating news at about 5:30 on Friday. Let me tell you when I say, it was the longest weekend of my life. We could not meet with any other doctors to answer our 5 million questions until Monday morning. We met with the Oncology team on Monday and Madelyn was scheduled for a liver biopsy on Thursday. Once all of the diagnostics were done, Madelyn was diagnosed with Stage IV Neuroblastoma. The doctors decided that because of her age, we would wait and see if it would go away on its own. The doctors stated that because she was so young this was a possibility. Average age that this disease is diagnosed is between 18 and 24 months old. On February 17, 2007, we noticed that Madelyn’s right lymph nodes were protruding from her neck, we called the Oncologists and we immediately went in for more scans. Madelyn’s disease had progressed and had spread from her primary tumor in her chest, to her liver, right lymph nodes, left lymph nodes and bone marrow. Madelyn had surgery to have her port-a-cath inserted in her chest and we started chemotherapy. Madelyn received 4 different types of chemo drugs and received 2 courses of 4 rounds of chemotherapy for a total of 8 rounds. We are happy to say that Madelyn was declared NED (No Evidence of Disease) in August 2007, weeks before her 1st birthday. We had a huge birthday party for her, celebrating her life and the long life that she will have thanks to the knowledge and abilities of all of her wonderful doctors. Ironically enough, when my husband and I picked out Madelyn’s name, we had no idea how appropriate it would be. Madelyn is an Irish name and means, strong woman and of course Grace means to us, that she is a Grace from God. Madelyn is so full of life and we couldn't be any prouder of the beautiful young lady she has become! God has plans for this little one. She is going to do amazing things!!