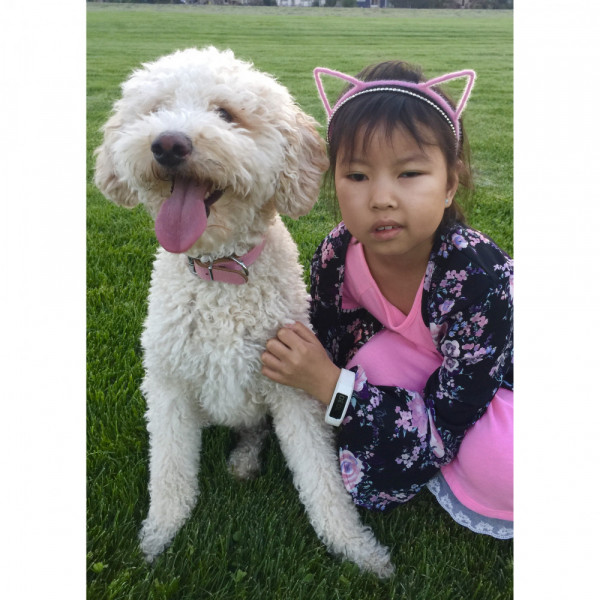 One of five St. Baldrick's Foundation 2015 Ambassadors.  Read more of Daisy's story on our blog.  Daisy’s signature belly laugh was big, full of happiness and irrepressible. The easy, frequent laughter is slowly making a comeback. The treatment and surgery has left Daisy with hearing loss, paralyzed facial muscles, hearing loss and nerve damage, but her spirit has remained intact. “Daisy has had amazing resilience since the beginning of her journey into this world. She is really a happy little girl,” her mother said. “Her happiness, joy and strength radiates within her, helping her to persevere in whatever struggles she has had to endure.” Daisy has a best friend in her sister Isabella, who is three years older. She is eager to do whatever her sister wants to do and it’s no sacrifice for her. She likes making other people happy. The family celebrates June 19, when Daisy was placed into her mother’s arms on her adoption day, dubbed “'Forever Family Day.” They also like to observe Chinese New Year, to help Daisy stay connected to her Chinese culture. Another favorite holiday of Daisy’s is Easter – no egg is safe from her zest for decorating. The determined little girl doesn’t look up to a superhero or a celebrity. Rightly so, Daisy said that she is her own hero, “…because I like me!” ---------- In April 2013, our family was given the shocking news that our youngest daughter had Brain Cancer. Our world was completely turned upside down and we couldn't grasp what 'normal' was any longer. We were thrown into another world of medical terms, sterile conditions, Doctors, Nurses, surgery, machines, rehabilitation, and the word Cancer. It was very very scary. Daisy courageously finished a years worth of treatment but after eighteen months of what we thought was remission and during a routine scan, we learned the cancer returned. Daisy was placed on a 100% experimental treatment plan designed by her doctor in Colorado using an adult liver cancer drug. She did well on the years long treatment that ended January 2017. Our hopes and dreams would be shattered all over again just three months later when we found out the cancer had quickly returned in April 2017. Daisy was then placed on another experimental trial using a breast cancer drug. The treatment didn't work.  We were sent home to create memories and prepare for our daughters impending death. We were allowed to send her for focal radiation on the brain tumor and a few months later, a spot in her spine. She finished the spine radiation in January 2018. By the time February rolled around, we had frantically located a Physician who finally said yes to treating our daughter and we boarded a plane to Augusta, GA for a Stage 1 Trial. Daisy is once again getting through treatment with laughter and jokes. Fart jokes are her favorite.  She is doing exceptionally well but doesn't like traveling for treatment because she missed her dog, Cupcake. Thank you for supporting me and the more than 300,000 kids worldwide who will be diagnosed with cancer this year. By sharing the gifts of your time, talent and money with the St. Baldrick’s Foundation, you're supporting research to give all kids with cancer a better chance for a cure.