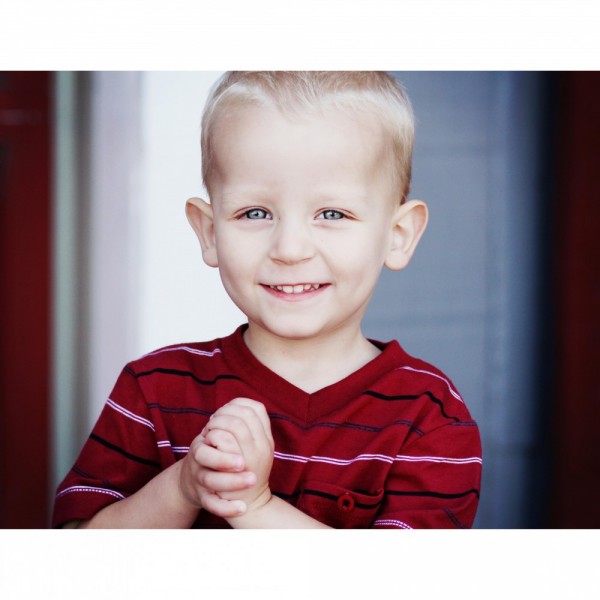 This is Caemon. Caemon was diagnosed with Juvenile Myelomonocytic Leukemia (JMML) just shy of his third birthday. This is a very rare form of leukemia that is hard to diagnose and very hard to cure. It affects about 1% of children diagnosed with leukemia--about one in a million kids under the age of six. Caemon was such a brave, smart, funny little boy. Prior to his diagnosis, he was terrified of doctor's appointments, but upon entering the hospital, he entered a world where we would become "Nurse Caemon." He made friends with not only his nurses and doctors, but also the machines needed to help him. If he needed an echocardiogram, he grew excited to know the echochardiogram machine was coming for a visit. He learned about programming the medication pumps, how to administer chemo, how to flush lines and take vitals. He was a three-year-old nurse while he went through his treatment, even teaching us that, "When you push the chemo in, the leukemia comes out." Caemon underwent a bone marrow transplant in December, which is the only hope for a cure with a child with a JMML diagnosis. However, just thirty days after his transplant, his leukemia was back full force, and this precious boy, this wise little soul left this earth on February 5th 2013--a mere ten days after we learned of his relapse. Caemon made a huge impact on those around him in the hospital. He loved his providers and learned so much from them, but he also taught them endless lessons--lessons about how we can all cope with our fears, lessons about just how much one can live in the short span of three years, and even how much one can love. As his parents, we miss him terribly, but we don't want Caemon to have died in vain. Supporting children's cancer research for illnesses like JMML will help ensure other families don't have to endure the losses of their amazing children. We thank you for supporting St. Baldrick's and for working to give kids like Caemon a chance at life. We have written about Caemon's journey through treatment as well as our journey after his passing at http://cisforcrocodile.wordpress.com.