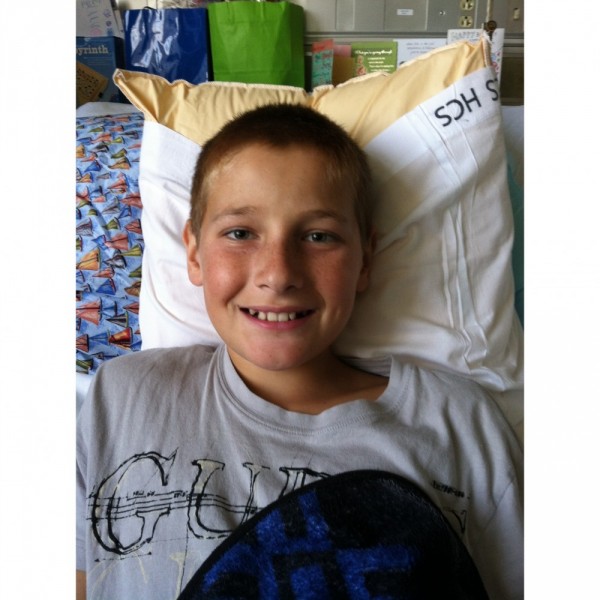 Thank you for supporting me and the more than 300,000 kids worldwide who will be diagnosed with cancer this year. By sharing the gifts of your time, talent and money with the St. Baldrick’s Foundation, you're supporting research to give all kids with cancer a better chance for a cure. Clay's Story @ pray4clay.blogspot.com : Monday 7/29/13 Clay began feeling a little tired and had a stomach ache, although, it didn't come across as abnormal. We weren't concerned at the time. Tuesday 7/30/13 Clay had a headache and was tired. Just like Monday, we figured it wasn't a big deal. Wednesday 7/31/13 Clay had fallen asleep downstairs the night before, so around 6:30 a.m., Clay called out for help. His mom ran downstairs and caught Clay before he passed out. Clay had a 101 degree fever and seemed fine after that. He was up and talking, tired, but seemed ok. Mid-morning, Clay's mom checked his temperature and it was about 101 degrees. She went on a short jog and returned within the hour. She checked his temperature again and his temperature spiked to 103.6 degrees. We immediately set a doctor's appointment for a couple hours later. Clay met with the doctor, but he couldn't find anything wrong, except for the fever. Clay's blood was taken for testing. We were told to take him home and if his fever went away, we could cancel the follow up appointment the next day. The doctor said they needed to test for improbabilities like Leukemia. Clay continued to be tired that evening and his fever continued. Thursday 8/1/13 We woke up on Thursday morning with Clay still sick. He had a doctors appointment for mid-morning with his regular PA, who was also his mom's close friend. She had to break the news that Clay's blood counts were low and it was likely Leukemia. We were told to take Clay to St. Luke's Hospital where he would be admitted and more testing would be done. We went home and his mom told Clay's sister and brother what was happening. They both accompanied us to St. Luke's. We met with a doctor at the Mountain States Tumor Institute (MSTI). Clay was admitted and a bone marrow test was scheduled for the next day. Friday 8/2/13 Clay had a lumbar puncture for the bone marrow test. We were told later that day that it was likely T-Cell Acute Lymphoblastic Leukemia (TALL). Our doctor still needed confirmation from the pathologist. Clay's red blood cells were too low so he had a blood transfusion overnight and his temperature was up to 105 degrees. Saturday 8/3/13 Clay had another blood transfusion in the morning. At 6:00 pm, the doctor told us that Clay was officially diagnosed with TALL. The doctor was awesome and sat down with us for hours explaining the treatment plan and the potential side effects. Sunday 8/4/13 Clay began chemotherapy that morning. It was his brother's 11th birthday, which we celebrated in the hospital. We used Facetime on a couple of IPads so Clay could watch his brother open presents. Monday 8/5/13 Clay's fever finally broke. He was able to eat and keep it down. Clay is on the road to healing. Tuesday 8/6/13 Clay celebrated his 13th birthday in the hospital. We had everyone wear masks and the hospital staff gave us a conference room. C Wednesday 8/7/13 Clay's fever was totally gone and he was allowed to go home. Monday 8/12/13 Clay had his Power Port installed in his chest, received chemotherapy, and his bone marrow was tested. Tuesday 8/13/13 Clay received word that he was in remission. Praise the Lord! We have believed through this process that God is healing Clay. Leukemia is defeated and Clay will have long life. We have been so blessed by the outpouring of love and support from family, friends, co-workers, and even acquaintances.