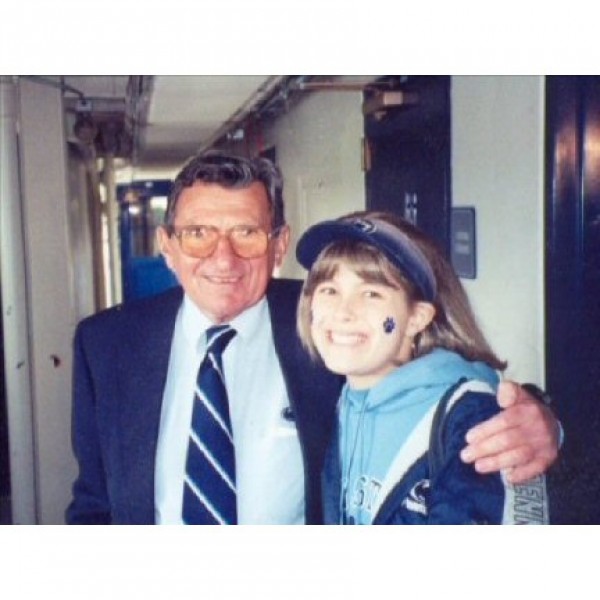 On April 22, 2002 Nicole was diagnosed with metastatic Ewing Sarcoma (bone cancer). Her results showed she had a tumor located in L2 and L3 of the spine, cancer of the lung, right arm and left ankle. Nicole was immediately sent to Children’s Hospital of Philadelphia where she was further diagnosed and began treatments. She went through 3 months of chemo, 17 treatments of radiation, 4 days of stem cell harvesting, two stem cell transplants and 6 months in isolation. Nicole was not supposed to return back to school until August of 2003. She proved them wrong! During her treatments Nicole never asked why me, but instead took the challenge on as she would any opponent she played in field hockey or basketball. She constantly told doctors the opposite of what they said. For instance, she was told she would have to have surgery to remove any part of the tumor after the initial treatment. She told them that she would not need the surgery, she was right. The doctors told Nicole that each stem-cell transplant would take 4-6 weeks, Nicole said no, and she was done in 2-weeks each time. Nicole was told that she would not be able to return to school until August of 2003, again Nicole said no, and was back by April 14, 2003, her birthday. During her battle, Nicole continued to be concerned about kids that she saw at Children’s Hospital of Philadelphia. During her stays and visits Nicole talked to kids about procedures, purchased stuffed animals for other sick children and gave nurses ideas on how to help other patients take medications and deal with side effects that come with treatments. During her hospitalization Nicole continued her school work. During her stem-cell transplants Nicole would complete assignments with a bucket by her side. She never missed a beat during her homework or rehab even with the nasty side effects. She never missed a homework assignment, did not have a grade below a B and even made the honor role. Her ability to stay up with her work and keep good grades allowed her to run and win the position of vice president of her class. After going back to school in April, Nicole got right back into the swing of things by coaching an elementary school basketball team. She took this opportunity not only to educate kids on the finer points of basketball, but on what it’s like to live with cancer. During the summer, her middle school basketball coach asked Nicole to help coach the summer league team. She surprised everyone by winning her first game. Nicole began preparing for the fall season by doing pool work and bike work. In late June she found out that her cancer had returned and that options were limited. This seemed only to intensify her determination and with her FAITH in God and the help of her field hockey coaches, athletic director, Nicole was able to practice and play throughout the season. Nicole took this opportunity to get field hockey teams in the Lehigh Valley to help her raise money to help purchase ICEE machines for hospitals that treat children with cancer. During her treatments, Nicole found that this cold substance helps break up the mucousititis, helps relieve pain associated with mouth sores, and helps keep medication down, and is one of the only things that stay down. By the end of the 2003 field hockey season over $15,000.00 dollars was raised. As of today, ICEE machines have been placed in Children's Hospitals to support those children battling cancer. In October Nicole was honored by the booster club with the courage award for her battle against cancer and in November she was honored at the Thanksgiving game pep-rally for her fundraising achievements. Matt Brown, Saucon Valley’s Varsity Boys’ Basketball Coach, presented Nicole with the autographed League Championship basketball for the courage she had demonstrated to him and his team. Nicole even went back to the hardwood that winter. After several weeks of practice, her varsity coach was concerned with the number of illnesses on the team and her low immune system. She continued to go to the games and support her teammates even when she was not feeling her best. In May of 2004 Nicole lost her courageous battle with cancer and true to her statement “She was not going to be a statistic to cancer” but she became light of HOPE for other children who have to battle cancer. If you tell Nicole she is a hero she will nod no, and say she is just someone trying to make a positive difference and that’s what everyone should do “We are all Angels in disguise with God given talents to make a difference in the lives of others less fortunate”. On May 3, 2004 Nicole lost her battle to cancer but she left a legacy, the Angel 34 Foundation. Nicole set up her foundation so "Every Child Would Have Their Own Angel During Their Battle with Cancer". Go to www.angel34.org to learn more about Nicole and the Angel 34 Foundation and how you can support children battling cancer. Nicole believed that we are all Angels in Disguise with God given talents to make a difference in the lives less fortunate." Be that Angel in Disguise and make a donation to support St. Baldrick's and cancer research.