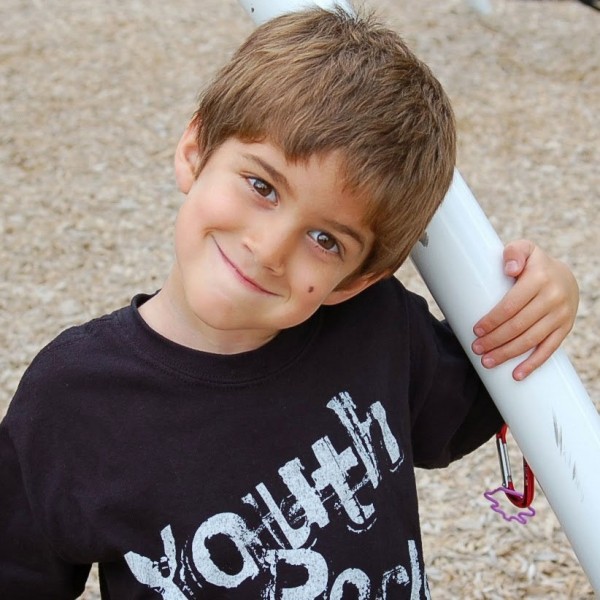 One of five St. Baldrick's Foundation 2015 Ambassadors Read more of Sam's story on our blog. Eight-year-old Sam loved all holidays. But being in treatment for acute myeloid leukemia made it difficult for him to celebrate his favorites – his birthday, Purim, Chanukah, and Halloween. His parents, Phyllis and Michael, both rabbis, made Sam’s last Chanukah a very special one. Sam had talked about having a fireworks show for his funeral. Instead, they had fireworks to celebrate the Festival of Lights and their vibrant son. “He was totally transfixed by the fireworks show, knowing that it was for him but not able to enjoy it as much as I think he wished he could,” his mom, Phyllis, said. “It was so poignant for all of us to know that fireworks would always remind us of Sam, and we're hoping to make Chanukah fireworks a community tradition in the future.” Sam’s spirit lives on in the work of his parents’ St. Baldrick’s event, 36 Rabbis Shave for the Brave. Garbed in purple and green, Sam’s favorite colors, that group of shaving rabbis and supporters rallied for research in April 2014, raising more than $744,000. Superman Sam, as he was appropriately known, was energetic, smart and funny. He referred to his cancer as a “ninja” after he had relapsed, because the cancer was strong and sly. Sam loved monster trucks, dragons and the James Bond movie soundtracks. He had a fondness for McDonald’s and pizza. But most of all, he loved his family. He looked up to his big brother, David, and Sam tried to do everything he did, whether he was old enough to or not. He lovingly bickered with his sister, Yael, who eventually shaved her head with St. Baldrick’s in honor of her brother. He adored his baby brother Solomon and Solomon loved Sam back intensely. “Solly talks about Sammy constantly now, as though he is a regular part of his life,” Phyllis said. “But he also tells me, nearly every night, how much he misses Sam.” ---------- Sam was diagnosed with AML in June of 2012. He completed treatment and was declared in remission in November of 2012 but relapsed at the end of March 2013. Although he received a bone marrow transplant in August of 2013, his ninja leukemia came back and he died on December 14, 2013. His life was not defined by his leukemia. He lived a beautiful life. Follow his journey and our family's journey at http://supermansamuel.blogspot.com Thank you for supporting me and the more than 300,000 kids worldwide who will be diagnosed with cancer this year. By sharing the gifts of your time, talent and money with the St. Baldrick’s Foundation, you're supporting research to give all kids with cancer a better chance for a cure.