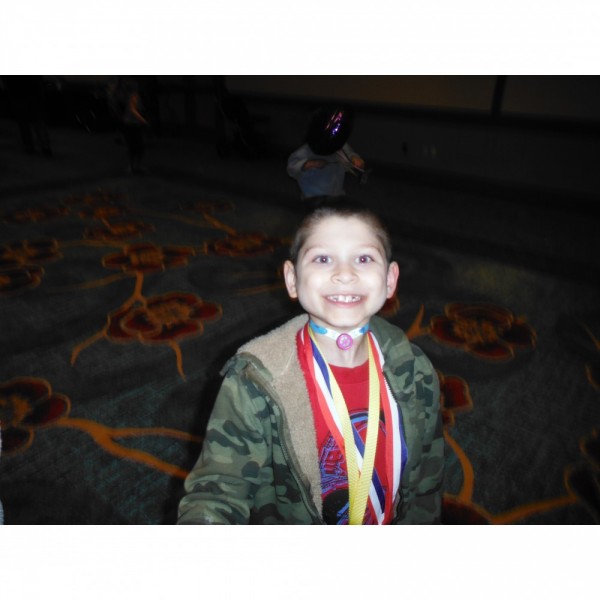 Nestor was diagnosed November 4th, 2011 at the age of 7 with papillary carcinoma thyroid cancer. We were told that this cancer is rare in kids his age. Thyroid cancer typically has a good prognosis but, when found in kids under the age of 10, it tends to be more aggressive and harder to treat. When Nestor's cancer was found, the doctors were in shock as they personally hadn't seen someone so young with this cancer. His thyroid was 3 times the size of an average thyroid and it was wrapped around his trachea. There were a lot of masses in his neck adding more compression to his airway and making it difficult to breath. When he would breath you would hear stridor (loud wheezing) but his oxygen levels were always stable. He is our lil miracle. When doctors would review his CT scan they had no idea how he was still breathing on his own. When more tests were done, it showed that his cancer had spread to his lungs. Between treatments 1 and 2, it may have also spread to his abdomen and pelvis. He is currently being followed by new doctors who are trying to confirm that it is a true spread. Nestor has a trach as his vocal chords were damaged when his thyroid was removed, but he doesn't let that stand in his way! He is a very active 8 year old boy who loves to be silly and have a good time! Nestor's treatment plan is currently being reviewed by new doctors who are looking for more aggressive ways to treat his cancer. He is one strong l'il fighter and we have faith that one day he will be cancer FREE!!!!