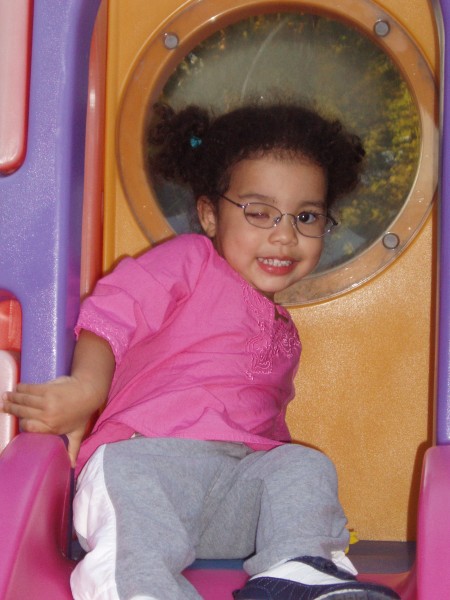 Imagine taking the day off from work on a beautiful summer morning. On August 1, 2005, my husband and I brought our daughter Joli to see a pediatric ophthalmologist in Boston for a morning appointment. After her appointment, we had planned to go out to a nice lunch, play in the park, possibly go to the children's museum, and then maybe go for a swan boat ride in the Commons. For a few months, Joli's right eye seemed to be wandering - a little 'lazy eye' as we called it. We didn't rush to bring her to a doctor as we figured kid's eyes were still developing and it was probably "just nothing." I remember it so well -- it was 8:15am, and the doctor quickly looked at her eyes. Just as quickly, he turned to us and "I don't know an easy way to say this. But, your daughter has cancer." "Excuse me?" I said. For months, even after my daughter's right eye was removed, as the emptiness in her eye socket healed, as her prosthesis was fitted, and as we sat by her side through her chemotherapy induced nausea, I still thought there must have been a mistake. "This isn't happening to us." Thankfully, my 2 year old daughter was stronger than any of use could ever have been. When most kids were learning "The Itsy Bitsy Spider", my daughter was learning how to flush her port-a-cath. When most little girls were putting their hair in cute ribbons and pony tails, my little girl was wearing knit caps over her shiny bald head. When most kids were running outside to play with others, we were confined to our house because Joli's blood counts were low. Yet, through all of this, Joli has emerged a strong, sensitive, caring and compassionate little girl. When she sees others who are "different" in the grocery store, she doesn't hesitate to smile and say 'hi.' She has also developed a sense of self and confidence that even I lack as an adult. Joli is my inspiration. She is my strength. She is the reason I choose to the see the light in the world and not dwell on the dark and negative things in our lives. I thought my daughter had changed my life when she was born, but the truth is that she changes my life every single day.