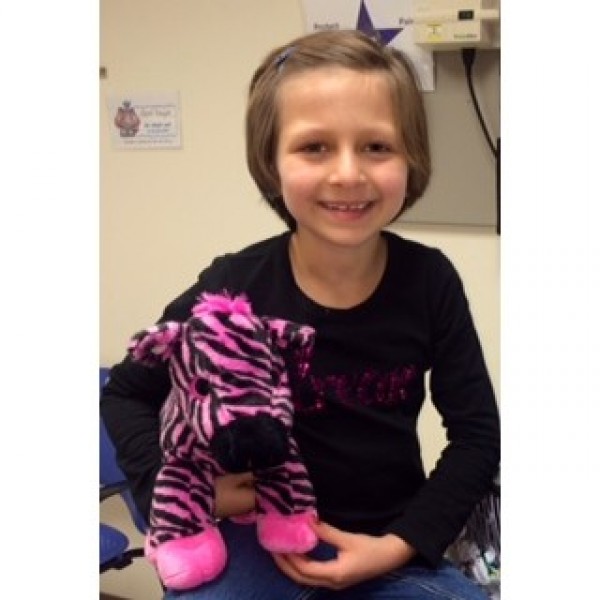 In November of 2011, Kailey started having trouble hearing. After numerous trips to the pediatrician and ENT for ear infections, enlarged adenoids, and allergies; we were scheduled for tubes and an adenoidectomy. A week prior to surgery, Kailey's lymph nodes became extremely enlarged and the pediatrician referred Kailey to Duke's Pediatric Hematology and Oncology clinic. On March 14th, 2012, the team at Duke found a grapefruit sized tumor in Kailey's chest (pressing on her heart) and multiple tumors on her adenoids. All of her lymphatic system was involved as well. Thankfully, her cancer had not spread to her brain or other organs, but it had caused her to lose her hearing due to fluid trapped in the inner ear from her enlarged lymph nodes and adenoids. On March 16, 2012, we began chemo therapy. Amazingly, by March 20, Kailey could hear again and breathe through her nose again. The impact that the first bit of chemo on her system was nothing short of a miracle. Over the next few months we progressed through the first few phases with repeated hospital admissions, when while hospitalized, Kailey developed a severe internal full body yeast infection. Until figuring out what was making Kailey so sick, she ran constant high grade fevers, could no longer hold anything on her stomach, and had difficulty with breathing. Once the team determined why she was so sick, they also let us know this illness would be something that would take 6-9 months to treat. Kailey has responded well to all treatments and no longer required a feeding tube in October, 2012, and no longer required regular treatment for the internal yeast infection in January, 2013. Kailey started "maintenance" on January 4, 2013; but began to present with abnormal lab reports again in February 2013. Multiple tests were performed and the team determined that Kailey remained in remission, but that she had a virus that would need to be treated. We treated the virus until March 15th, 2013, and now we continue to progress through the stages of maintenance therapy. We are blessed and thankful to be where we are today. Kailey will be healthy enough to join her peers at "regular school" again on Monday, April 8, 2013. She is really looking forward to seeing her friends again. Thank you for supporting Kailey and the more than 300,000 kids worldwide who will be diagnosed with cancer this year. By sharing the gifts of your time, talent and money with the St. Baldrick’s Foundation, you're supporting research to give all kids with cancer a better chance for a cure.