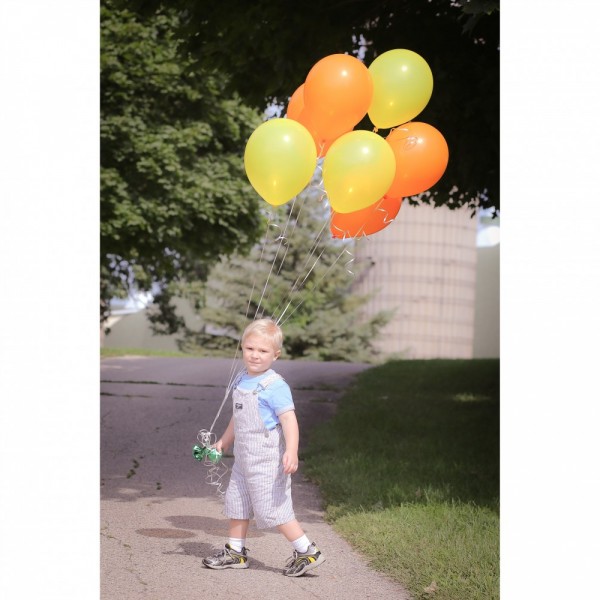 Thank you for supporting me and the more than 300,000 kids worldwide who will be diagnosed with cancer this year. By sharing the gifts of your time, talent and money with the St. Baldrick’s Foundation, you're supporting research to give all kids with cancer a better chance for a cure. Here is Zeke's story: Ezekiel was diagnosed June 13th 2012 at the age of nine and a half months with Infant ALL (Acute Lymphoblastic Leukemia). In the beginning Zeke ran a fever of 105.4, we took him to the Emergency room very early Friday morning and they said he had an ear infection. Gave us an antibiotic and said if he wasn’t better by Monday to take him to the doctor and they would change his antibiotics. By Sunday Zeke had spiked another really high fever so we took him back to the ER and they confirmed that he still had an ear infection and gave us new antibiotics and sent us home. Monday comes around and Eric has started a week intensive class and I was home with Zeke and throughout the day he didn’t eat, drink, pee, or poop. So after talking to the attending doctor he told us to take him to the ER again for dehydration. So Eric got out of class around 4pm and I told him we had to go back to the hospital. On the way down we both knew that there was something more wrong then an ear infection. Once in the ER they told us they were going to admit us for dehydration, and to observe him since this was our third visit in four days. They did blood work and when the blood work came back they said that his counts were very messed up. His red blood cells were at a 3 when they should have been an 11, white blood cells were at .8 when they should have been a 5 and his platelet levels were in half. We asked the resident why his counts were like that and she said it could be anything from a blood infection, to Leukemia. Of course our minds went to the worse... Immediately they gave Zeke a blood transfusion and admitted us to the Cancer and Blood disorder floor. We spent two weeks in there and then went home for five days. On the fifth day our home health nurse was coming out to draw blood and before she got there Zeke was laying in his chair and all the sudden let out a really loud scream and began to cry. We didn’t know what was wrong or what to do so we called his doctor and told them we were bringing him in. As we went to the hospital I remember telling Eric that I think his appendix had ruptured... I brought that concern to the doctors and they said that they don’t typically see appendicitis in children that young. They did an X-ray and it showed that he had “Free Air” in his tummy and it looked like he had Tephlitis which is swelling of the intestine. Normally they would just go in surgically and find where the hole was and fix it but since Zeke's counts were so unstable they were hesitant on doing that. It got to the point he was so bad that the surgeons asked us what we wanted to do. Did we want them to surgically go in and see what the problem was or give him antibiotics and see if that clears it up. Eric and I had to make a life or death decision for our son and we didn’t agree on what we wanted done so finally the Surgeon said let’s just give him antibiotics and see how he does. He was on them for two weeks. He had his last dose on a Friday at around 6pm and if he was to continue his next round would have been at 1am. By 3am he was beginning to go downhill quickly. The surgery team was notified and was by his side the whole day observing him. Around 4pm I was talking to the surgeon and as we were talking Zeke started vomiting green bile. With that she said ok, we are going to the OR right now! She didn’t wait for anyone to take him down, she took him herself! She did the surgery then came out and said, “The surgery went well… Zeke had NO sign of an appendix, it had exploded!” I looked at Eric and said “I KNEW IT!!” She explained how she opened him up and all the infection came out and that after she cleaned him all up she gave him an Ileostomy, which is where they take the intestines and bring them out of the skin and makes him poop in a bag. Once this was done everything started to go a bit smoother… For a couple months anyway… In October after he had a couple high doses of Methotrexate it knocked out his Ostomy and they had to go in and revise it because it was falling beneath the skin and causing a lot of skin breakdown. Once they fixed it Zeke did well again. Until his last dose of Methotrexate again. The week before Christmas as we were getting ready to go home Zeke’s stoma began to fall beneath the skin again so right after Christmas they went in and put him back together again. Now he has normal function of going to the bathroom! We were so excited to see his first poopy diaper!!!! Zeke was declared in remission on July 27th 2012!! He had to continue treatment until July 14, 2014. We were extremely excited the morning we gave him his last dose of Chemo! This is a very brief version of what happened throughout our Leukemia journey if you want to read more you can look at Zeke’s caring bridge site it is www.caringbridge.org/visit/ezekieldixon or on his facebook page www.facebook.com/strengthenedbygod