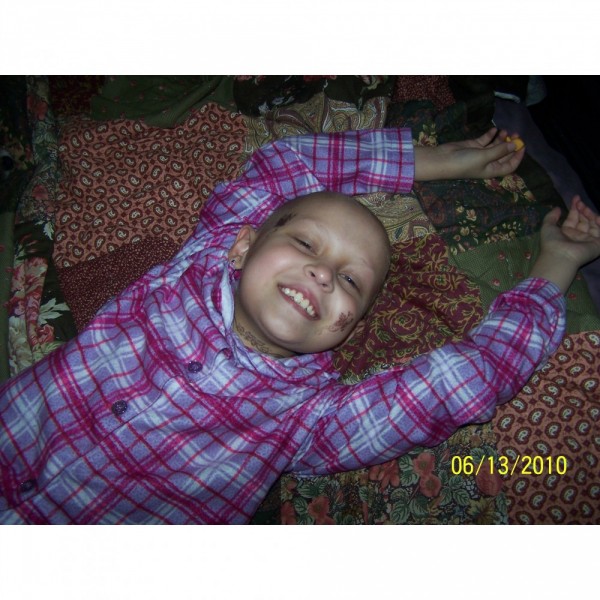 In October 2008, Cambrey woke up early one morning with a really bad nose bleed. We knew something was wrong but hoped we were only being paranoid. When we got to the Doctor's office they did a finger pick to check her blood count. Her finger took a real long time to stop bleeding and bled alot. Her Doctor came back and told us we needed to get to Kosair right away. When we got there they had us go through the express registration. After an IV and another blood draw we found or selves on 7 west the cancer floor at Kosair. By now it was becoming clear that our normal life was about to change. Later, a nurse came in to tell the doctor that the lab called and said the blood draw had been contaminated and another was needed. He said no, the sample was good just have them give me the counts. He came back and told us that her white blood cells were 256 and it should be 4.5 - 10. Cambrey needed to have a central line placed so she could have a procedure called apheresis to remove the white blood cells before they caused harm to other organs. The next day they did a bone marrow aspiration and told us this would give us our diagnosis. One day later we had the results Acute lymphoblastic leukemia (ALL) add that with the high white cell count and now she was considered high risk. They told us she had a 60/40 chance to beat this, not what we wanted to here but still the odds were in our favor. Treatment was started right away and a remission came fast things were starting to look good in our new normal. Going to treatments and labs spending time recovering from chemo at home. All through 2009, It looked like we had it beat and then in December we went in for labs and chemo and her platelets were low so we had to reschedule. This took us through the Hoildays. We had a great time and everything just seemed perfect. Then we went back to the clinic once again low platelets and this time something new a few cells that looked to be blast cells aka cancer cells. Our world crashed down on us a second time. We were told that we needed to be admitted and test needed to be done to confirm. A few days later we were told what nobody wants to hear, relapse. Time to start over and this time bone marrow transplant was part of the plan. Over the next 5 months the doctors tried every protocol they could find. We spent almost the entire time in the hospital only coming home for a few days at a time and then back again. At the end of May 2010 we were told there are no more treatments available. Our daughter had become chemo resistant. We spent the next few weeks giving Cambrey as much love as we could, rarely ever leaving her side. The morning of July 17, 2010, Jesus came and took her home as she sat beside me.