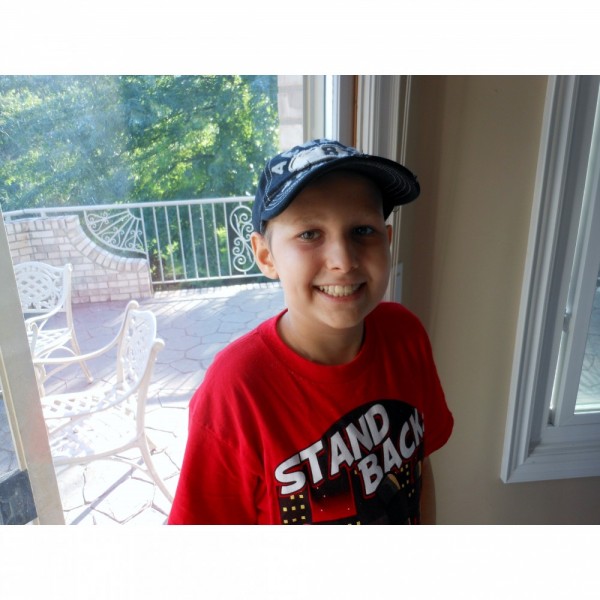 In 2008, eight year old Joey Caretti suffered a seizure while visiting family one hot July day. It was then the doctors discovered that Joey had a brain tumor and would require surgery. Although the surgery was long and recovery difficult, we were all so grateful that the tumor was benign and Joey would recover fully. In April of 2010, Joey suffered another seizure and much to everyone’s disbelief, they found another brain tumor. This one however was malignant and very rare. Joey had surgery again in which a large section of his brain was removed. We were warned that he would need much therapy, would have trouble speaking and difficulty with his memory. But Joey surprised us all and did not require any type of physical therapy at the time and I am pleased to say that his memory is amazing! He has become a card shark, beating everyone at knock-knock poker and Go-fish. Joey had a total of 18 grueling chemo treatments to get through and then went on to spend six weeks in Indiana for Proton radiation. Just after completing all his treatment it was then discovered that Joey had Leukemia, a rare side effect from one of the drugs used to cure him. Only 2% of those treated with this drug will ever develop Leukemia. He went on to have more chemo and then a Double Cord Blood Transplant at U of M Hospital and spent 46 days as an inpatient. Since then, he has suffered greatly. At one time he could not walk and was wheelchair bound. He still cannot go to school or out into crowds. His hair will never grow back in on the left side of his head. I want you all to know what a sweet and special boy Joey is. Through this all, the pain, being so very sick after chemo and missing out on many summers and his childhood, he has remained so concerned about others. He often apologizes for being sick and causing us so much work, never forgets his manners nor complains, all which breaks our hearts. Joey wants to be sure people do not forget about his brother, his twin sister Maggie or his friend that has gone through an almost identical illness as himself. Joey loves to swim, play basketball and his new X-Box. He had been a student of Dynamic Martial Arts where he has studied karate for several years and has earned many awards. His last belt is a “blue/black belt” and he hopes to return to the Dojo soon.