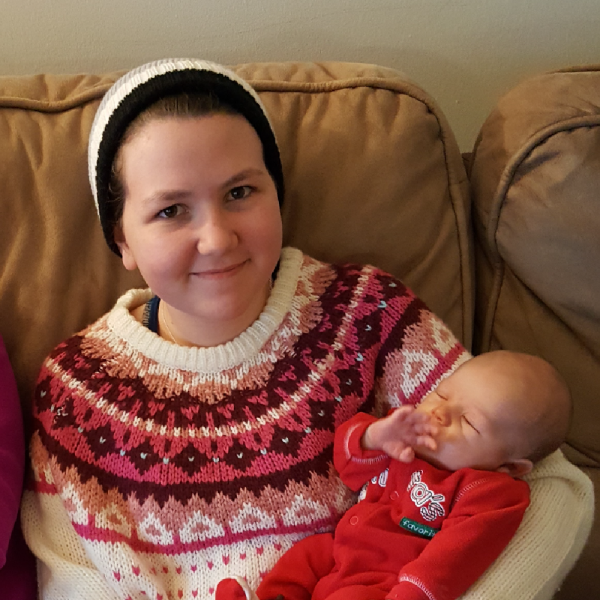 Children's Hospital of Richmond at VCU

Update 2019- Mackenzie just turned 16 this week!  It has also been 13 years since her diagnosis. She is in 10th grade, still making the honor roll- although she struggles with math. She says she's finally ready to go take her permit test and get her ears pierced! I'll believe them both when they actually happen- especially the piercings! She is taking a break from dance class this year but continues with Dance Crew at church. She will be traveling to New Zealand and Australia at the beginning of the summer with a group from her school. Dad and I are just a little jealous. This picture is her with her newest nephew, born in December. Please continue to support St. Baldrick's and childhood cancer research! Our kids need a fighting chance!

Update 2018- Wow! I didn't realize it had been so long since I updated here. Mackenzie will celebrate her 15th birthday 2 days after this year's event! The day after her birthday will be the 12 year anniversary of the day she was diagnosed. Thankfully, for us it is a day we don't have to relive over & over again- because she is a survivor! Mackenzie insists we continue to volunteer at St. Baldrick's every year for all the families that can't claim that victory!  I guess it's her way of giving back. She doesn't talk much about having cancer. Every now & then if she has to share a significant event in her life or talk about a cause, she'll bring it up. She started high school this year. She is in JROTC and learning Latin! She still maintains honor roll. Mackenzie is still dancing- taking Hip Hop & Jazz this year, as well as being a part of the Dance Crew in our children's ministry at church. The kids love her and treat her like a celebrity! More kids diagnosed with cancer need the chance to grow up & live normal lives just like Mackenzie! (Don't ever tell her I called her normal!) Thank you for supporting St. Baldrick's! We'll see you next year! Bring your friends!

Update 2014- Mackenzie just celebrated her 11th birthday! It has been 8 years since she was diagnosed and she is still cancer free! Mackenzie is maintaining honor roll in 5th grade at Kraft Elementary. Fall will bring her big move to middle school. I’m not quite sure she is excited about that. She still says she doesn’t want to grow up yet! Maybe being robbed of 2 years of your childhood feeling crummy from chemo will do that to you… Thank you for supporting St. Baldrick’s! We hope to see you back next year!

Update 2013- Year 2012 certainly came and went in a flash. Mackenzie was doing so well at her appointment last March that we were finally moved to once a year check-ups at the oncology office. Mackenzie is in 4th grade this year and is doing well in school- A/B honor roll! We've noticed some issues that are most likely due to the chemotherapy she received while on treatment but she is a warrior and is overcoming each hurdle as they pop up. Please consider supporting childhood cancer research. Cancer is not a normal illness that comes for a time and goes away. These children will deal with the effects of their cancer and its treatment for the rest of their lives. Help find a cure- donate now!!!

Update 2012-Wow! Has another year flown by already? Mackenzie is still doing great. She now only goes to the oncologist every 6 months for a check-up. She is still doing ballet and has also started hip-hop dance this year. We are so blessed by her and her good health. Unfortunately, we know many kids who continue to face cancer bravely. Some battles are won, some are lost. The war is not over until a cure is found! Please help support St. Baldrick's!

Update 2011- Mackenzie had her first long-term appointment in February. It has been 5 years since she was diagnosed with leukemia. She has officially earned the title- CANCER SURVIVOR!! Mackenzie is now in 2nd grade. She restarted ballet last year and will be performing in a recital in May. She also became an aunt in December. Thank you to all of you who support St. Baldrick's! You make a difference in many lives!

UPDATE 2009-- Since we became involved with St. Baldrick's, Mackenzie has finished her 26 months of chemotherapy. She went off treatment in May 2008 and had her Port-A-Cath removed in December. She is in kindergarten and is adjusting well to life as a "normal" kid. We thank all of you who support St. Baldrick's each year. You help make survival stories like Mackenzie's a reality for more and more families through the research your generosity supports.

2007-- Mackenzie is an energetic, sensitive 4 year old who loves to snuggle up to you and stroke your hair. She loves any opportunity to play with other kids and delights in time spent with her siblings and cousins. Mackenzie enjoys putting together puzzles, reading, doing makeovers and playing mommy to her many baby dolls. Most importantly, she has taken on cancer with courage and bravery. She never ceases to amaze me!