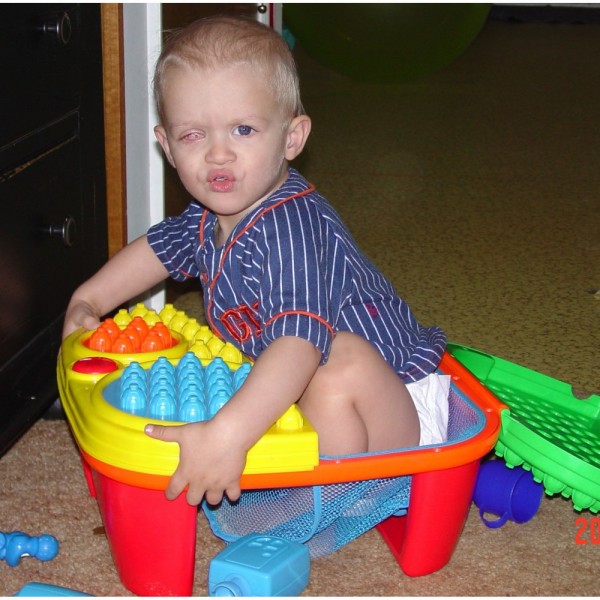 Thank you for supporting me and the more than 300,000 kids worldwide who will be diagnosed with cancer this year. By sharing the gifts of your time, talent and money with the St. Baldrick’s Foundation, you're supporting research to give all kids with cancer a better chance for a cure. By the time Jeremy’s Retinoblastoma was diagnosed the tumor was visible to the naked eye. His cancer is so rare that it took the third pediatrician to diagnose it. Jeremy was 10 ½ months old. The first two pediatricians didn’t know what they were looking at. The fight to save his life wouldn’t end there. The first set of specialists said they had only heard of three cases of Retinoblastoma in the seven years they had practiced in the area. After three rounds of chemo and the tumor not reducing to a callous, as the specialists had predicted, we finally found a doctor in our area very familiar with Retinoblastoma. He would receive at least seven new cases a year. He took Jeremy off systemic chemo and treated his eye with laser and cryo until it became necessary to remove the eye. Jeremy’s right eye was removed March 9, 2005. After the pathology on the eye was returned it was discovered the cancer had escaped the eye. This meant that it could possibly be on the way to Jeremy’s brain which would mean certain death. It was time to do a more aggressive regimen of systemic chemo. Jeremy lost his hair and regressed in speech and other developmental milestones. Jeremy’s last dose of chemo was September 2005. Jeremy’s last MRI was in 2010. Jeremy has annual visits to the Hematology/Oncology center at St. Louis Children’s Hospital to monitor for late effects of the chemo, he had to take to save his life, as well as for development of more Retinoblastoma in his one remaining eye and secondary cancers. While he is in a state of “No Evidence of Disease” NED, there is so little truly understood about Retinoblastoma that he will need to be monitored for the rest of his life. When Jeremy was diagnosed in 2004 we were told there were only two forms of Retinoblastoma; Hereditary and Sporadic. Now there has been a third form, Mosaic found. With new research more and more answers are being discovered. We are so thankful for that. When Jeremy is ready to have a family of his own we hope there are answers for him with regards to him passing this one to his children. In the unfortunate event that Jeremy would pass this on, we have great hope that with research enucleation and/or chemo is not necessary. Today Jeremy is a happy healthy nine year old boy. We fight every day to keep him that way. He enjoys basketball, rollerblading, and working with his hands. He is willing to try anything. If he gets knocked down he gets right back up. Nothing keeps him down.