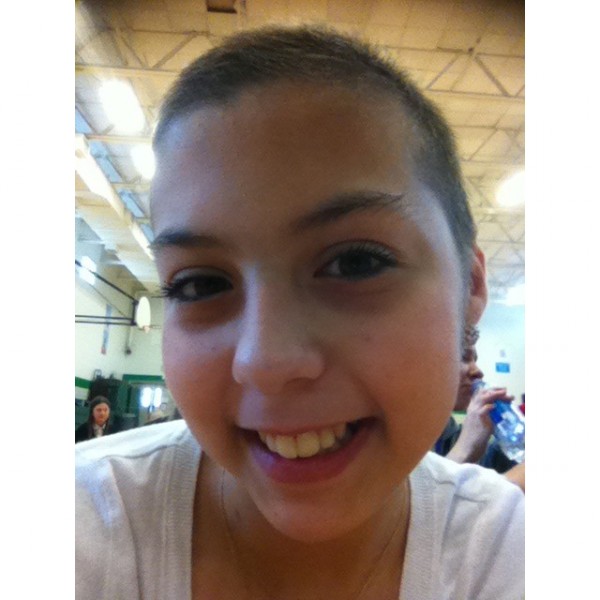 Thank you for supporting me and the more than 300,000 kids worldwide who will be diagnosed with cancer this year. By sharing the gifts of your time, talent and money with the St. Baldrick’s Foundation, you're supporting research to give all kids with cancer a better chance for a cure. Caitlyn was a typical preteen with the usual aches and pains of the growth spurt she is undergoing. She was evaluated in August of 2010 with lower extremity x-rays indicating an entirely normal physical exam. Since she grew a large amount in the year subsequent to this time, much of what was stated in August visit with the pediatricians indicated that these were normal growing pains. In early 2012, Caitlyn indicated that she could not bend her right leg all the way back in sitting on her feet. As this did not appear to be painful, it was elected to have her see the pediatrician in June 2012. Of course with the x-ray showing a bony tumor in her upper shin, we were puzzled how this could've possibly grown so fast inside of 18 months. After the biopsy, this tumor was diagnosed as a paraosteal osteosarcoma, which is regarded as a low-grade type cancer that does not typically spread to the rest of the body. As bone scans and other studies indicated there to be no spread to other areas of the body we were cautiously optimistic. the workup at the time however showed that there were small spots in both lungs and she would be in need of ruling this out as spread of the disease. So after a very invasive surgery on June 15 2012, it was determined that these small spots were not spread of the cancer. They were determined to be small lymph nodes and did not contain any tumor tissue. the doctors wanted to let her lungs recuperated and heal before another surgery was undertaken. On July 11th, Caitlyn underwent an above knee amputation of her right leg which was successful. She had been fitted with a prosthetic leg about 5 days after surgery. She had adjusted well and continues to move about with the leg. The final pathology report showed 90% low grade cells and unfortunately 10% high grade (aggressive cells) which meant 7 months of chemotherapy. This had been difficult news to hear, but the prospect of excellent long term control is what the doctors had mentioned as they do not feel the disease has spread.One of the chemotherapy drugs used to treat the cancer had created changes in her brain (called leukoencephalopathy) which has been found on an MRI study. Although she does not have any symptoms other than an occasional headache, the doctors felt it best to discontinue the use of the methotrexate drug they suspected that caused this. Because of this, her treatments were shortened to December of 2012. They also did not feel that there will be any compromise of the treatments due to the discontinuance of the medication. Caitlyn completed her chemotherapy in December 2012. She is now in the process of learning how to walk again with a prosthetic limb. In January 2012 full body scans were done and it was determined that she is now cancer free. As of January 2013, she has returned to school full time and is now looking forward to increased mobility with her new leg.