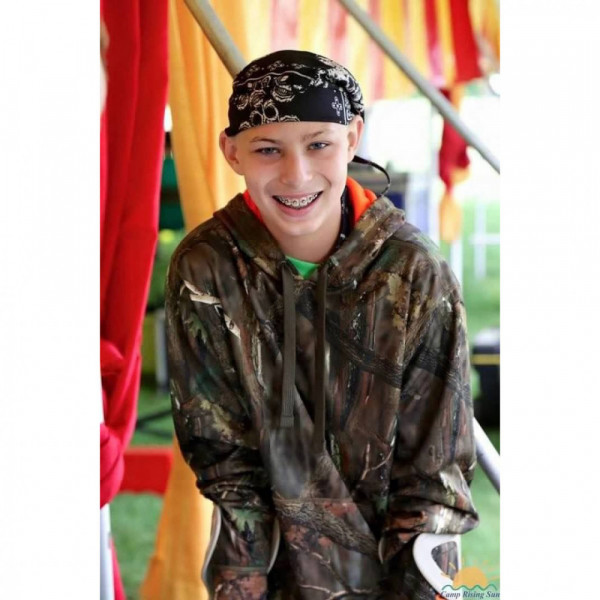 After fighting with the heart of a Spartan for 6 years, Marik’s battle was ultimately won. He is now where he can finally run freely, hear every sweet sound that was missed on earth, and he can be forever, cancer free. Marik Paul Tucker was born on June 16, 2002 in Lake Charles, Louisiana. He was set free on Friday, April 13, 2018. He was one of a kind. He was the King of Xbox, a Twitch fanatic, a lover of all things spicy, and the sender of a million funny animal memes and emojis. He could make you so crazy that you wanted to pull your hair out, then flash you a smile that could melt a glacier. He had a way of making serious situations easier, and laughed at the most awkward times. He told jokes that no one understood, but his delivery was so on point, you couldn’t help but laugh. He lived life in the fast lane, always wanted to be the winner, and called his wheelchair a hotrod. Marik’s piercing blue eyes, amazing smile, spirit, passion, and heart, turned him into somewhat of a celebrity. He has hobnobbed with everyone from Dallas Cowboys stars, Gas Monkeys, and even Hollywood elite like Dwayne The Rock Johnson. He was a proud American School for the Deaf Tiger, and his Letterman jacket was one of his most precious possession. He was a larger than life kid, and anyone who met him would agree. The hole that his departure leaves in our hearts and lives is truly indescribable. It is only surpassed by the gratitude we have of being fully loved by him, and entrusted to have been given the gift of his life for the past 15 years. He is survived by his parents, biggest fans, and the suppliers of unlimited snacks and video games, George and Kelli Tucker. His big sister Shellbi, who never let him sit in the front seat, and bossed him incessantly, but would have traded places with him in a second. Also, his Mario Kart competition and younger sister, Tori, aka The Fake Sleeper. His Grandparents, Roger and Sondra Tyler and Randy and Illeen Buller. Great Grandparents Bill and Anna Rose Guillory, as well as his Aunts, cousins, and friends. He will be welcomed into heaven by his German Shepherd, Zero and hamster, Stud. His MawMaw Charlotte and PawPaw George, his beloved Momma Lone and Poppa Lone, and his baby cousin Audriey. Marik is preceded in death by the hundreds of thousands of children and friends, that have died due to a lack of funding for pediatric cancer research. No child should ever endure what these children have. They deserve better. We must do better. In lieu of flowers, Marik would like you to direct donations in his honor, to his favorite place on earth, and the only place he was really, truly, happy, Camp Rising Sun’s Charitable Foundation. Where cancer doesn’t matter, and lifelong bonds are formed. The family would also like to take this time to express our absolute love and gratitude to everyone that was #TeamMarik. We could never thank all the organizations, people, doctors, nurses, and friends without missing someone. You have carried us through the last 6 years. Marik was loved. Every second of every single day. He will live on in every sunflower you see, every bunny that hops by, and every belly laugh over pure silliness. Strong to the Finish little man. You finally did it. You “made the winner.” You are free, and we couldn’t be more proud of you.