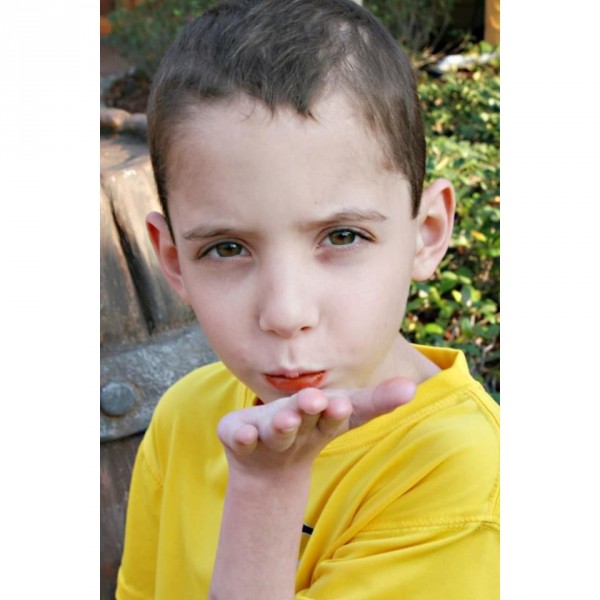 On October 20, 2010, a 4cm tumor was discovered in Trent's brain. The next morning Trent underwent an intense 7-hour brain surgery. Pathology, later confirmed Trent had Anapalastic Medulloblastoma, a very aggressive form of brain cancer. He remained at UVAMC until his discharge November 2nd, 2010. Trent began 6 weeks of radiation, given 5 days a week. This radiation focused on Trent's brain and spinal cord. After radiation, he then took a month "off" treatment in order to recover. Trent then began a regime of Chemotherapy treatment to last 6-8 months. The next year will be difficult for him, his loved ones and all his friends and family. Trent has experienced setbacks with infections which included hospital stays; very low blood counts requiring infusions; and has continued to experience the "pain" in his belly area which was the first symptom he experienced and led to his diagnosis. As much as he enjoys food and eating; he has gone for days at a time with no desire to eat or drink, because of the "pain." 8/18/11 less than 24 hours d/c from hospital, Trent was taken to Winchester ER, for vomiting and severe belly pain where he received an emergency platelet transfusion for critically low levels and was transported via ambulance to UVAMC. 8/19/11 - his liver enzymes were elevated. Trent was experiencing severe pain and did not sleep, ALL night! Scans of his belly area showed veno-occlusive disease: blockage of the veins to and in the liver, caused by high doses of chemotherapy. Nothing could be done to correct it except for "blood busters" BUT because his labs are so critical, that is not an option. Saturday - 8/20/11 - Trent was sent to the PICU; lab levels still critical. The team was now worried about kidney function. Into Sunday, 8/21/11 Trent became oxygen dependent, his liver was not functioning and all the fluids and blood products he was given backed into his belly, making it very difficult to breath. He was placed on a CPAP, a machine that forces air into the lungs. Finally administering pain meds so Trent can rest. Monday, 8/22/11 - Ultrasound shows a lot of fluid on his lungs. 2 chest tubes were surgically placed and draining fluid off lungs, begins to breathe a little better on his own. Tuesday, 8/23/11 - the team at UVAMC after conferring with other specialists, determined Trent is more critical than they thought and he would be transferred to either Duke or Hopkins where an experimental drug, not approved by the FDA, is offered. The drug is called Defibrotide and has shown 75% success rate correcting this disease in pediatrics. Wednesday, 8/24/11 - Decision made to fly Trent to Hopkins, finally arrived at 9:30ish PM. Thursday, 8/25/11 - treatment started, team says; will see indications of improvement within 48-72 hours - if this drug works for Trent. Trent was finally discharged from Hopkins on Halloween 2011. He went home to an awesome homecoming and was able to trick-or-treat with his brothers. Since then he has spent each day recovering and growing stronger. Doing the things that most 7 year old boys do. He started back to a normal routine and schedule of school etc this month (January 2012). He and his mommy, Jennifer, blasted off on Thursday, 1/ 12/12 to Charlottesville UVAMC for the tests and consults that have become normal since this battle started. Friday afternoon, after the MRI, the news came; its back. 5 tumors, 2 on his brain and 3 at the base of his spine. For the next 6 months Trent continued to fight a hard battle. As cancer is for a lot of families, Trent and everyone who loved him experienced a rollercoaster of good news followed by bad. As the months went on Trent was not able to receive treatments on schedule because of his slowly recovering blood levels. During the summer of 2012 Trent slowly started to show worsening symptoms including pain, headaches, and an unsteady gait. In July he took another turn for the worst and after a long battle he passed away in the arms of his mom and dad and surrounded by family and friends. Trent left a lasting impression on all who knew him. He was the definition of a blessing. Through his short life he made everyone fall in love with him. His support system included a large family, devoted friends, the members of the UVA wrestling team, Strasburg Fire Department and Rescue Squad, all the members of his elementary school, and so many more.