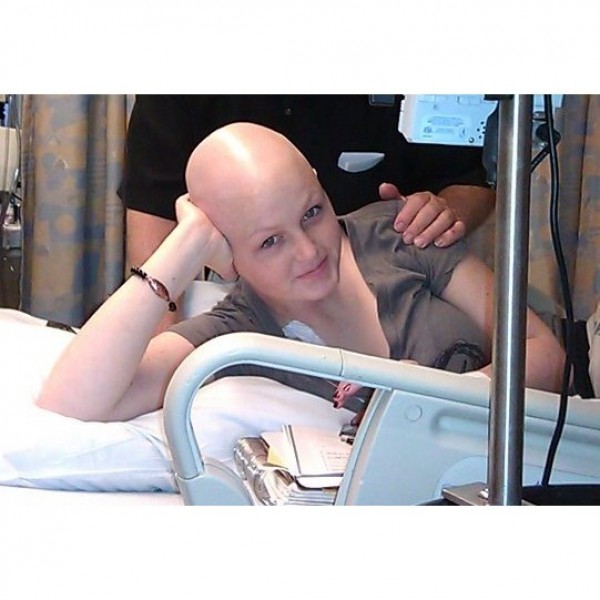 I will let Ashley tell her own story in her words.... October 18th was the day of my surgery, and I thought that when I woke up afterwards that it would all be over. The surgeon told me they thought it was either a mucous sac or a cyst and they would drain it and I'd be all better. So I had the highest of expectations that this was the end. The sweet end to the pressure in my head, the numbness of my face, the migraines; but it was just the beginning. Still loopy and drowsy from the anesthesia, the nurse rolled me out of the surgery recovery area and into the hospital room where my famiily was waiting for me. I have never been so happy to see my family, until I looked up at my dad. He looked at me with tears holding onto the corners of his eyes as if there was a secret within them that he wouldn't let spill. I knew right then that something was wrong because I had never seen my dad cry. Later that night after the anesthesia wore off and I was at home, my dad told me that the surgeon who had been performing the same surgery for 40 years, had never seen anything like it so they did a biopsy of it. I didn't know what to think. On Thursday, I had my first appointment at UCLA with a new head and neck surgeon, Dr. Wang, who wanted to talk to me about the surgery and what the possible outcomes of the biopsy results could be. I didn't prepare myself for the words she would ever so blatantly and callously say, such as "aggressive" or "tumor" and especially not "cancer". This wasn't set in stone though, this was what she thought the biopsy results were going to find as true. I had to wait until the next day to know for sure and I still didn't know what to think. The next day was Friday, October 21st; the day I was going to find out the results. I went to school that day a normal (sort of) teenager, but I wouldn't be the same by the end of the day. I was sitting in fifth period and the pressure in my head was almost unbearable. We were watching a movie, and even with the lights off I couldn't concentrate to save my life due to all the racing thoughts that accompanied the pain. So just as I had done so many times before, I took out a pen and piece of paper to write down my thoughts, and this is what I wrote. I'm in a place in my mind that I've never been to before. People keep asking questions but I don't want to give an answer. I've watched tears flood the eyes of so many already. I'm trying not to break down, but I'll admit it. I'm scared. Dr. Wang seemed so sure. A tumor. Aggressive. Cancer. My mind can't wrap around the thought that something so surreal and scary is uncontrollably taking over my life. I just wanted the pain to go away. I didn't think I'd ever hear the doctors talk about a tumor or cancer. I never thought I'd have people crying and worrying about me like this. I hate it. And I'm hoping it's something that'll be easy to get rid of but we still don't know what it is. God, life works so weird. It was only 16 days ago that I was at my first doctors appointment. Then the MRI. Then the CAT scan. Then the surgery. And now..this. I don't know what to do or how to act. I've only told the people I think honestly care or the people I think deserve at least that much. Some people I just blurted it out because if I didn't say it, I'd have felt weird in the most unexplainable way. But I knew something was wrong. But cancer? No, it can't be... Can it? It was about an hour later that I got the phone call that confirmed that my worst fear of having cancer was real. I was 1 of the 350 cases that were annually diagnosed with this rare soft-tissue sarcoma, rhabdomyosarcoma. I was, in the most harsh form of the phrase, one in a million. But I never thought that I'd be happier today than I've ever been. I actually am grateful that God put me through this because I've found a beauty in life, in people, and even in myself, that I wouldn't have found without this year. Cancer changed everything, and I'm so glad it did.