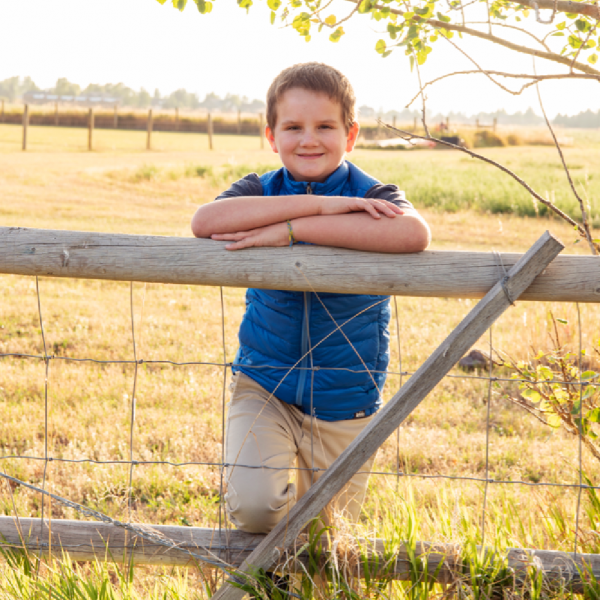 In March 2012, three months shy of his 4th birthday, Caden began complaining of occasional leg pain. Then, he developed a low-grade fever and began complaining of neck and hip pain. The fever and pain persisted and Caden became very lethargic. Blood work showed very high indicators of inflammation and anemia. X-rays, ultrasounds, and a bone scan all appeared normal. Nothing was lining up to provide a clear diagnosis and his fever and pain continued. An MRI then showed abnormalities in the bone marrow of his hips, legs, and spine. His right adrenal gland was also slightly enlarged.

On March 30, 2012, Caden was flown 700 miles from home to Seattle Children's Hospital. The initial fear was leukemia, but a bone marrow test pointed toward another type of cancer – Neuroblastoma.

On April 3, Caden was diagnosed with Stage 4, High Risk Neuroblastoma, a solid tumor cancer of immature cells within the sympathetic nervous system; it is difficult to treat. Caden began an aggressive course of treatment on April 7, 2012. Six rounds of high dose chemotherapy were administered over 5 months. On July 30, the primary tumor site and adrenal gland were removed. Slowly, between the associated side effects of vomiting, exhaustion, mouth and throat sores, blood infections, NG feeding tubes, and viruses, Caden’s strength and cheerful, funny nature returned. He began to walk, even run, and play with his sister again.

Scans in late August 2012 revealed that although the cancer was not worse and had been reduced some, it did not respond as well as hoped, nor enough to proceed with the anticipated autologous bone marrow transplant. Caden then completed a seventh round of chemotherapy and traveled to San Francisco for specialized intravenous radiation therapy (I-131 MIBG therapy). This treatment significantly reduced the amount of cancer present, and Caden moved forward into transplant and traditional radiation therapy in early 2013.

In March 2013, he began six months of immunotherapy, including five rounds of difficult inpatient antibody infusions and six rounds of therapy trying to turn the cancer cells (immature nerve cells) into benign, matured nerve cells. Finally on September 11, 2013, after 17 months of treatment, scans showed that Caden had "no evidence of disease". He and his family lived in an RV in the hospital’s parking lot for over a year and returned home to Montana.

Less than two months later in November 2013, a small amount of neuroblastoma was found in his marrow, and he was then considered "relapsed". His blood was collected for a trial in Texas using his T-cells; the cells are engineered in a lab to fight neuroblastoma. During the time while the cells were engineered and FDA requirements of the trial were worked out, he did six rounds of the medication that can mature the neuroblastoma cells into benign ones from home. During that treatment, he had two sets of "no evidence if disease" scans but the final one again showed a few neuroblastoma cells. When preparing to go to Texas for chemo and his T-cell infusion, his scans and "luck of the needle" showed "no evidence of disease" and he became ineligible for that trial but eligible for another trial available through Primary Children's in Salt Lake City. In July 2014, Caden started on a two year trial of a low intensity drug called DFMO.  While on DFMO, Caden was able to start kindergarten and resume a more normal home life.  Other than additional hearing loss, the DFMO side effects were minimal.  Throughout the DFMO trial, Caden maintained "no evidence of disease" status and completed the trial in August 2016.

In August 2017, Caden had a third "relapse scare" with positive-staining cells found in his marrow that are now believed to have been matured and benign.

Other than expected long term effects from treatment, Caden has been doing well as a survivor.  He continues to be checked annually in Seattle.  We will always long for the day when a cure is found.