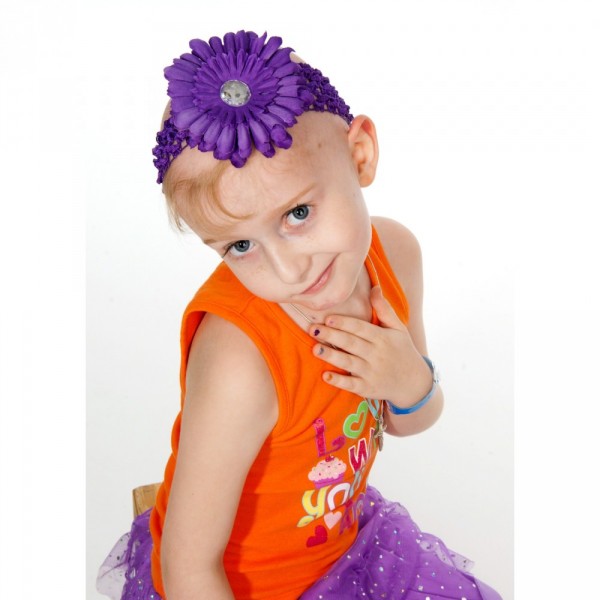 Gracie was diagnosed with Adrenal Cortical Carcinoma when she was 15 months old. On April 5, 2006 Gracie’s right adrenal gland with the tumor contained was removed in Dayton, OH. The surgery was successful. Gracie spent the next 5 years going for scans, labs, MRIs, ultrasounds, check ups, etc. She was cleared 5 years cancer free on April 8, 2011. She was 6 ½. On April 23rd, she was at an Easter egg hunt & began to drag her leg, later that night her arm jerked & she was running a fever. After an urgent care visit, ped. visit, an MRI showed Gracie had multiple lesions on her brain. She was diagnosed with a disease called A.D.E.M. Unfortunately, that wasn’t correct. Thank God, Gracie was part of a St. Jude study from her 1st Cancer. St. Jude asked if we’d like to come for treatment in May of 2011. We lived in Memphis for 4 months and then traveled back & forth from Dayton, OH to Memphis every other week for the next 6 months & then once a month for 7 more. Gracie’s diagnosis was a very rare, inoperable brain tumor called “High-Grade Thalamic Glioma”. The tumor affected Gracie’s whole right side similar to effects of a stroke. She began radiation immediately along with chemo. She received an award/certificate for being the only patient to give herself her sleepy medicine for all sedation with radiation & MRIs. She fought for over 17 months. Most of her treatment was at St. Jude and the last few months at Cincinnati Childrens. She always remained happy, upbeat, loving, kind & positive during her journey. She worked extremely hard in OT, PT and in school. She was an inspiration & a fighter. Gracie had a wonderful, funny personality. She loved to sing & dance. Gracie was a lover of purple, sparkly things, butterflies, Scooby Doo, her family, friends and St. Jude. Gracie became a beautiful, purple, butterfly angel on Sept. 2nd, 2012. You can get more details about Gracie’s journey at www.caringbridge.org/visit/Hope-Love-and-Gracie