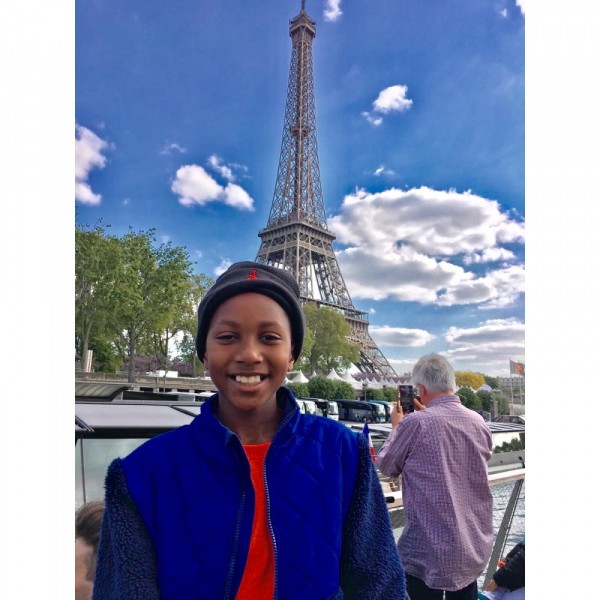 One of five St. Baldrick's Foundation 2014 Ambassadors Read more of Harlem's story on our blog. At 8 years old, Harlem has already proven himself to be a powerhouse on the track and on the soccer field. Looking at him now, you never would guess that he was diagnosed with Hodgkin lymphoma at the age of 5. In fact, you might not have known it while he was in treatment, either. Harlem’s parents always knew he was tough, but even they were shocked by his undaunted strength during round after round of chemotherapy. The doctors had warned them that he would lose his hair, weight and energy as side effects of the drugs he was taking, but throughout those six months, Harlem remained just as strong and lively as he ever was. Harlem’s cancer diagnosis didn’t slow him down in school, either. Today, he is in second grade at a bilingual school, where the majority of his lessons are in French. Despite a four-year age difference, Harlem and his older brother, Malcolm, are inseparable. When Harlem was in treatment, Malcolm cooked for his brother and carried him on his back wherever they went. Harlem looks up to his brother and says he wants to be a firefighter just like his dad. Like many kids his age, Harlem’s favorite time of the year is Christmas. But Harlem and his family are now celebrating a new holiday: December 27, the day Harlem’s doctors told him he was cancer free. __________ Harlem's story, as written by his family: My name is Harlem C and here is my story...In September 2011 a lump appeared on my shoulder that looked like a small hotdog. I brought it to my mom and dad's attention that it hurt. My parents took me to Kaiser Oakland and after many test I was diagnosed with Hodgkins Lymphoma. I have just completed chemotherapy and will start radiation treatments soon. My parents always tell me how proud they are of me for being such a brave little boy through it all. In the US, more children die of childhood cancer than any other disease. This is my small contribution to help find a cure to ultimately reduce the number of children affected with this disease. I ask that you please make a donation of any amount on my behalf to support childhood cancer research. To make a donation, click on "Donate Now" and type in my dad's name "WELDON CLEMONS" or you can donate by mail or phone. Thank you so much for your support! Blessings Always! Harlem C