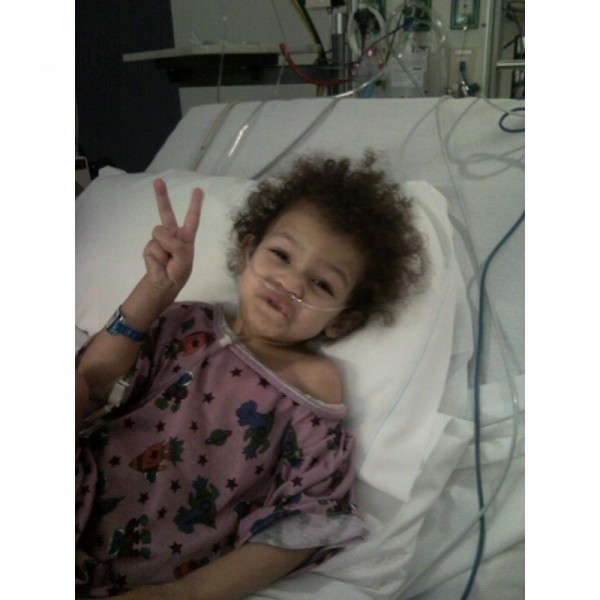 Malia started getting sick around December 21,2010. She was treated with antibiotics for two ear infections and medicine for her cough. After taking these medications for ten days she didn't seem any better. Her cough was actually worse. She refused to eat or even walk anywhere. I took her back to the doctor on January 4, 2011 and asked for a chest x-ray to been done as well as all the other test originally done to be done again. The x-ray was done, the doctor took down her history and called an ambulance to transport us to Scottish Rite. There, they did another x-ray to check for fluid in her lungs and a CAT scan to determine exactly why the x-ray looked the way it did. The doctors originally assumed she had a severe case of pneumonia. We were told that night we were looking at a very large mass covering her left lung and that it would be quite a while before Malia could come home. We were then taken to PICU. The Oncologist informed us Malia had Plueropulmonary Blastoma. PPB is a rare cancer that affects babies and small children. There have been only about 300 cases of it nationwide in the entire 30 years of treating cancer. Malia's tumor completely covered her left lung and had grown so large that it had pushed her heart to the right side of her chest where her right lung was supposed to be. As a result of her heart being misplaced it had caused her right lung to be pressed down to about 1/3 it's normal size. She was basically breathing off of 1/3 of a lung. The chemo shrunk the tumor enough for it to be removed surgically and then more chemo killed any "seeds" that may have been planted other places in her body. She underwent chemo treatments from the beginning of January 2011 until mid September 2011. Malia is almost 3 years old and is the best little girl you could ever meet. She is very independent and persistant in everything she says and does. She is also brilliant. She amazes her father and I everyday with things she says or does that we didn't even know she knew. She is strong, funny, and the most loving child. We went in for her 3 month post chemo check up and all her scans and tests came back clear and negative. As of right now Malia is now cancer free! We will continue routine checkups every 3 months for the next 2 years. If we can make it through these years without any abnormalities showing in her scans and test she will be clinically declared cancer free. She is the strongest person we have ever met. She is our Angel.