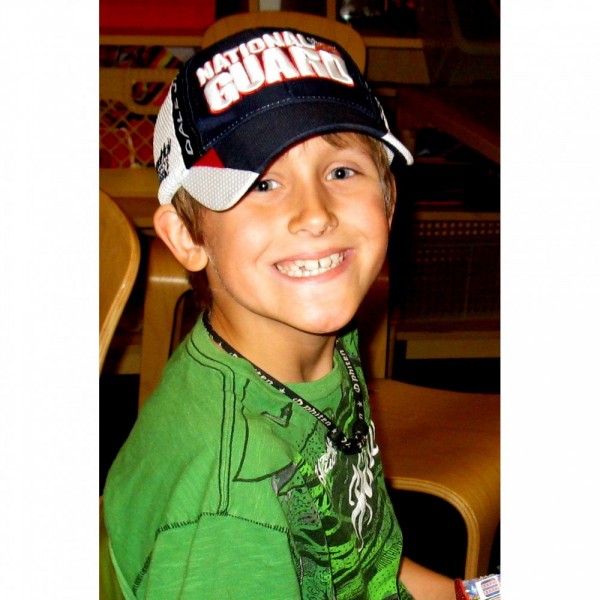 Eagle Point, OR, US

Our 7 year old son Ethan was diagnosed with Stage IV Alveolar Rhabdomyosarcoma (ARMS) on August 6th, 2009. He had no symptoms until we started to see a little lump on his chest near his left breast (it was his tumor bulging out). He complained of some pain so his doctor ordered an ultra sound. During his ultra sound we could tell something was wrong from the look on the technician’s face. That evening we were called by our doctor with the news that Ethan had a large mass the size of a softball in his chest. August 1st, 2009 we were admitted to Doernbechers Children's Hospital in Portland, Oregon. After biopsies, several tests and agonizing days of waiting, Ethan was diagnosed with ARMS Stage IV. He had a large tumor wrapped around his heart, collapsing his left lung airway, another large tumor in his abdomen that went through his diaphragm, pressing against his liver and stomach, and cancer in his lymph nodes. Ethan received his treatment between Portland, Oregon and where we live in Medford, Oregon. Ethan received 6 weeks of radiation in Manhattan, New York between Jan 2010-Feb 2010. We decided to travel to New York because of Dr. Wexler at Memorial Sloan Kettering. He specializes in the type of cancer Ethan has and we know how CRUCIAL radiation was in his treatment, especially because we did not do surgery. Ethan received 7 toxic chemos throughout his treatment. Finally, on September 21, 2010 Ethan finished his intense chemo plan. But the statistics of relapse for ARMS was haunting the family. Keeping this is mind, we fought for Ethan to get on a maintenance plan. Since the maintenance plan was not an option at Doernbechers, we switched to Dr. Wexler in New York. Luckily he agreed to oversee Ethan's treatment from New York and work with their local pediatric doctor at home. He approved putting Ethan on a maintenance plan that started in November, 2010. Ethan was taken off his plan in January, 2011 because he got the BK virus. His brain swelled, he was peeing blood for weeks, had horrible bladder spasms, and constant pain. Ethan was flown to New York where he spent 3 weeks in Feb 2011 at the Ronald McDonald House in New York so he could be treated by Dr. Wexler. It had taken almost 2 months for his urine to come back completely clear with no BK virus and finally on April 1st, we received the news that there are no BK cells in his urine. He also had scans on April 7th that were CLEAR!!! Now the plan was to get him back on his maintenance plan. Ethan started having some pain in his side and in his legs. Scans were performed in Medford that showed no indication of cancer. We were left to wonder whether it was a side effect of the various treatment Ethan had been receiving or if he had actually relapsed. Over time the pain was getting worse, and when discussed with Dr. Wexler we were advised to fly to New York once again. On June 21, we received the most devastating news parents could receive: Ethan had relapsed and the cancer was EVERYWHERE. It was in the bones of his his legs, pelvic bone, sacrum, spine area and ribs. He started his new chemotherapy treatment, Irinotecan and Temodar on June 23. After two weeks of treatment, we received more devastating news: the chemo is not working. At that point, Dr. Wexler put Ethan on palliative care and we flew back home to see if there were clinical trial options available at Doernbecher's. Once at Doernbecher's, Ethan’s platelets continued to drop, making him ineligible for clinical trials. As his parents, we never gave up, continuing to look for additional options and alternative treatments. While in Portland, Ethan’s health starting declining fast. It was on August 8, 2011 that Ethan earned his Angel Wings. Ethan was such a special boy. He always had the biggest SMILE on his face no matter what he was going through. He had this AURA about him that just drew people in. He had a HUGE heart, loved others (even the bad guys, he would say) ... And NEVER did he complain, he just fought with all he could to beat cancer.