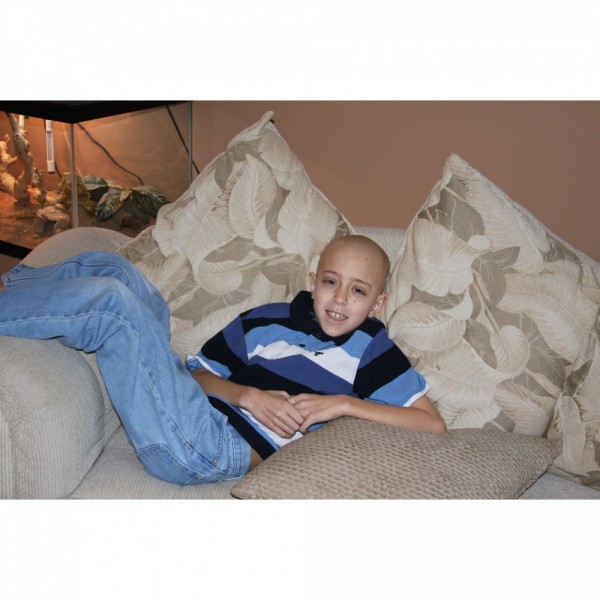 On December 29th 2011 at the age of 9, our son Nicholas was diagnosed with a rare and aggressive form of Leukemia called, Burkitt's Leukemia. Burkitt's is less than 1% of all childhood leukemia's. At the time of his diagnosis, more than 80% of the cells in Nick's first bone marrow biopsy were cancer cells. His Doctors immediately began what is to be an intensive 7 month long chemotherapy plan. Nick is just about half way through that plan and to date he has endured, 4 rounds of chemotherapy, 4 bone marrow biopsy's, a dozen spinal taps, more than 6 transfusions and countless other medications to help with the side effects of all his chemo and Nick has never complained once. When in the hospital, Nick wakes up to a big sign his mom made saying, "smile, today's going be a great day!!!". Every time we give Nick a hug and a kiss we always say "kiss with a smile" and no matter how bad Nick is feeling he always gives us a great big smile and says "I love you more than anything". His motto for fighting the cancer every day is "give nothing and take back everything" and to date Nick has done exactly that with each bone marrow test resulting in a lower percentage of cancer cells. Before Nick became sick he was an extremely active little boy that everyone loves. Some of Nick's favorite things are, football, lacrosse, basketball, riding his motorcycle, quad and go kart, skiing, snowboarding, paintball wars, fishing and of course Call Of Duty on XBox. Nick's favorite places are, the beach at MomMom and PopPop's house, the beach in Cancun and camping at Otter Lake in the Pocono Mountains with his family, friends and neighbors. Nick has an older brother, Robbie who is 13 and the two of them do almost everything together and since his diagnosis Nick and Robbie have only grown closer together. Nick's doctors, Dr. Halpern, Dr. Fritz, Dr. Gregory and Dr. Neier of the Morristown Memorial Hospital Vallerie Center, have given Nick a 93% chance for 3 years and at 5 years he could be labeled cured. We can not say THANK YOU enough to all of the AWESOME doctors, nurses, social workers and therapists who have strived to make Nick as comfortable as possible during his treatments and who have given our little boy a chance for a long and normal life.