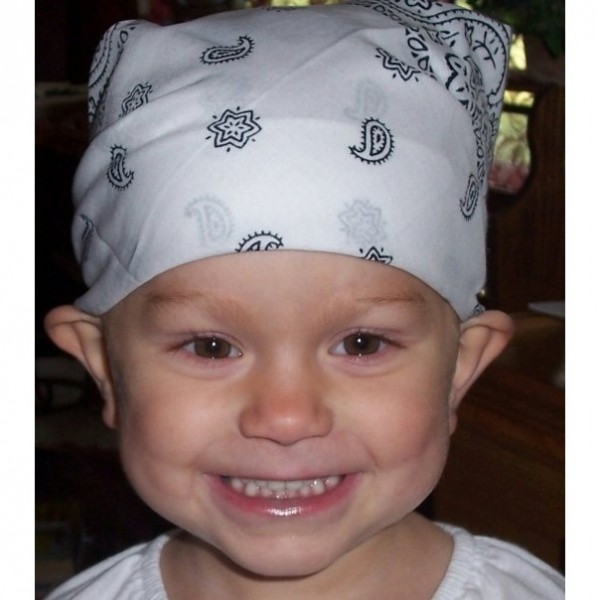 I am not sure how to start this, not an easy topic for me to think let alone write about, so here it goes… My little angel was born on September 22, 2003. She was the kind of baby you never believe exists...the kind a parent talks about...the perfect baby. She only cried when she was hungry or needed to be fed and if you were able to keep up on both of them you never heard a peep out of her. Then came every parent's worst nightmare --- hearing the words "your child has cancer." Yeah right this can’t be happening, this can’t happen to me. Well, I have learned that yes it can. We had been struggling with Megan’s swollen lymph nodes for about a month. Everything they had given her did nothing and finally they sent us to an ear nose and throat doctor and they gave her steroids. Within a couple days of giving the steroids to her, the swelling went down. That was the best feeling in the world after dealing with something no one could heal. Soon after that Megan began to have night sweats --- and when I say night sweats I mean her waking up fully-soaked from head to toe. I blamed it on the steroids of course, it couldn't have been anything else! Then the swollen lymph nodes came back and I knew right then and there that we were not dealing with some little infection. I'm not sure if any of you parents have had that gut feeling that something isn’t right with you child and usually it turns out that you are correct. I called the doctor the next day and brought Megan in. The doctor did a blood test on Megan to see what was going on. Finally after the test had been read, the nurse came into the room followed by the doctor and my stomach felt sick. It was almost as though I could read the look on there faces. When he looked at me it felt as though he was saying it really slow, kind of like a dream. He said he had already called Children's Hospital and they are getting a room set up for Megan. "WHAT?" I said. A room, what was he talking about? I had my son with me that day. I could just imagine what was going through his head. I had to be strong for him and keep myself together. The nurse walked us out to the vehicle. I I think I called my whole family on the way home. When I arrived home we got some of Megan’s things together and met her stepfather there. Over to Children's Hospital we went. When we arrived at the hospital they had everything all set up for us. They needed to get an IV into Megan. Oh my gosh, I think the whole nursing staff had a pick at her. I couldn’t stand it anymore I felt my blood pressure going to skyrocket. Here is this little helpless child and you have everyone picking her with a needle as though she was a pin cushion, Finally a Flight for Life team came in and they got the IV in. If it wouldn't have been for them I'm not sure what I would have done. I know Megan needed it but I wanted to kick them all out and tell them to LEAVE us alone. They ran a bunch of tests and finally told us that Megan had T-Cell Leukemia. Then you get the big book called the "cancer bible." When I first started reading through it I wanted to cry. It finally started to hit me: my daughter had cancer. We were diagnosed on July 11, 2006. We ended up in the Children’s Hospital emergency room on April 30, 2007 with what we thought was some type of infection, I had taken some lab work to the local hospital and within an hour our nurse from Children’s Hospital called me saying we needed to have Megan seen right away, that her white blood cell counts were high. After a number of tests were run, her white blood cell count kept going up and her platelets kept going down, the same thing that happened from the very start of all this. On April 2, 2007, after a spinal tap, our worst fears came true. Megan had relapsed. At this point it was already in her brain too. Her speech was very slurred, to the point it was so hard to understand her. She kept saying her head hurt. I was brought into a room where three doctors were sitting and they told me that Megan had relapsed. I lost it. The tears began pouring out. The doctors said they had a couple of different options but none were very promising!! I asked about the percentage of survival rate and they said it was 8-12%. As most of you know, when you ask a doctor a question like that they don’t give you more info than you'll need to decide whether you should put her through more tests of drugs (although you have no idea what they will do to her little body) or let God take her in His arms. After hearing they had no idea what these new drugs would do to Megan I just couldn’t do it. When we were on our way to the hospital, I promised her there would be no more pain or needles. She had already gone through what most adults couldn’t even handle. On May 4, 2007, at about 4:30 am Megan was given the most beautiful angel wings and she now is pain free!!!!! This “CANCER” word seems as common as a cold is now a days. We need to find a cure for this monster. It has to be stopped. We all all want our children to live healthy, happy lives. Let's make this cure as simple as the common cold is…….