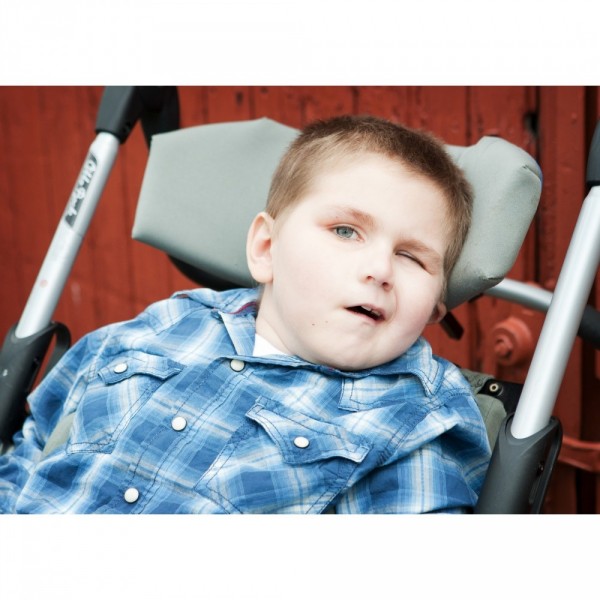 Miles was a happy and seemingly healthy boy. He was learning to read, add & subtract and just finished up his Kindergarten program before being diagnosed with Medulloblastoma in April '10. What we believed to be Migraines turned out to be a 4 cm tumor. The tumor was fully resected on April 28. Miles suffered from Posterior Fossa Syndrome following the removal of his tumor. He was unable to move his right side & suffered Cerebellar Mutism. While in Inpatient Therapy to regain strength, Miles' initial incision leaked. He was sent back to the Hospital & during a procedure to do an Anterior Third Ventriculostomy (internal shunt) was diagnosed with Bacterial Meningitis. After almost completing the cycle of antibiotics for Meningitis, Miles suffered a cardiac arrest that was the result of a duodenal ulcer that went undiagnosed and hemorrhaged. He suffered damage to the area of his brain that controls his motor skills due the lack of blood oxygen to his brain during the arrest. A week later, Miles again arrested from the same hemorrhage and ended up in emergency surgery to save his life. Miles came home that June a 5-yr-old trapped in a body that he couldn't control. He was relearning to do everything and his neurologist said he would probably not be able to sit upright or walk without assistance. He suffered from seizures due to symptomatic epilepsy, had a feeding tube as he could not eat orally (was relearning toward the end), had a VPL shunt and although he gained his voice was still unable to speak words. He was in Special Education in a Multiple Impairment classroom. Every day was a struggle, but we tried to do it all with a smile! Miles endured so much in the four years he battled brain cancer, but continued to make progress. Although our first priority was treating the cancer, we also had the task of dealing with the 'disabilities' Miles had due to complications in the beginning. Our hope for the future was for Miles to beat Cancer and regain as much abilities as he could. As a family we made many decisions and changes to allow him to be able to beat the odds. Miles is one of four boys and ranks in at number 3! He had an amazing spirit and amazed us daily. As we looked forward to the future, we also held on to the past through memories of who Miles was before Cancer. He would have never been the same little boy and for that we felt a great loss. We were also very Blessed to still have him for the extra time we were given and  held onto the Hope that his stubborness and determination would take him beyond the expectations. Unfortunately, Miles relapsed in January of 2013 & July of 2013. Miles received his Miracle, his Healing in Heaven, in my arms with his Dad and three brothers by his side on March 6, 2014. There isn't a moment that passes that we don't miss our sweet boy. We love you to Heaven! Miles Quinn Root
7/22/04 ~ 3/6/14