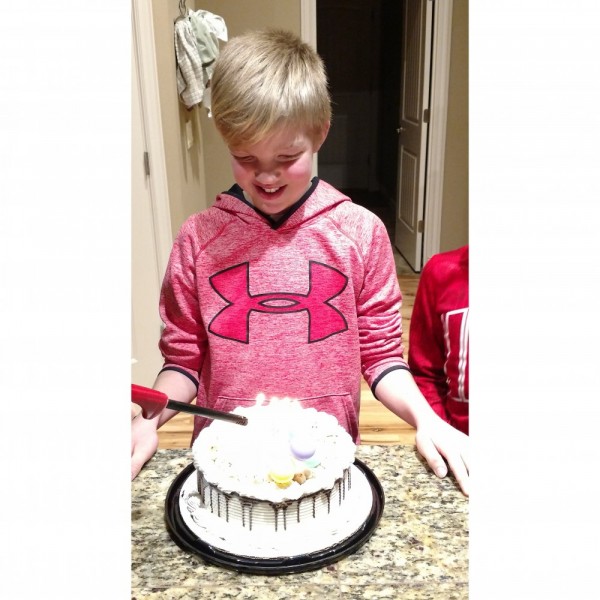 We were blessed with our first child Charles (Charlie) on 2/15/06. My wife had a normal pregnancy and he was your normal happy baby, not a care in the world: Charlie was already plotting to take over the world at a very young age On Wednesday 6/14/06 my wife took Charlie to the Dr’s office for a cold that had been going on for about a week. The Dr who was on call did a normal examination of him and also felt around his abdomen a little and said he felt a lump that could be an enlarged spleen due to a virus. He sent us on our way with an antibiotic prescription and a request that we follow up with our regular doctor in a week to make sure that the spleen was back to normal. On 6/21/06 after his cold was gone, my wife took Charlie back to the Dr’s office for the follow up, and they decided it was a mass in his belly instead of an enlarged spleen. At that point the Dr scheduled an Ultrasound for us. On 6/22/06 we went to the hospital in downtown Boise to have an ultrasound done on him, and they confirmed it was a mass attached to his Kidney but needed a clearer picture to assess it and scheduled us to come back the next day for a CT scan. On 6/23/06 we headed back to the hospital again for the CT scan. If you’ve never had one of these, it’s a very large imposing machine that takes amazingly detailed scans of your entire body and you have to be VERY still in order for it to work. Try telling that to a 4 month old baby… Someone was looking out for us that day though, Charlie decided to take a nap right at that time when we were doing the CT scan and woke up right after they finished it. They immediately sent us over to the MISTI clinic (short for Mountain Inter States Tumor Institute) to consult with the Oncologist there (I never knew all of these titles and terms, but now I will never be able to forget them). We met with our Dr, who after looking at the CT scan, confirmed that our baby had a tumor on his kidney (it was called a Wilms Tumor Stage 2). They did the initial consultation with us and advised us they would schedule surgery for Monday 6/26/06 to remove the tumor. They needed to do blood work and other tests before they could do surgery, so they checked his blood pressure and found it to be like 130/100 which is high for a normal person, but especially high for an infant. Needless to say, they immediately checked us into the hospital to try and get Charlie’s blood pressure down to a safe level. After a long, grueling day on Monday 6/26/06 of surgery postponements, they finally were able to complete the surgery on Tuesday 6/27/06. It was a 2 hour procedure to remove the tumor and his left kidney that had been crushed by the tumor (if you’re interested it is called a left nephrectomy in medical terms) at which point they sent samples of the tumor to be evaluated which was later confirmed to be cancerous. After they confirmed the cancer, they allowed us to go home on Friday 6/30/06. We were due back on Monday 7/3/11 to have a port put in his chest. A port is a device/tube that is inserted in the patients’ chest that allow the Dr’s to give the chemotherapy drugs in a way that it won’t touch the skin and it goes directly into the blood stream through the vein’s right by the heart. The chemotherapy drugs are so caustic that they actually will burn the skin if they touch it, so the ports are recommended for most chemotherapy patients. Right after the surgery to put the port in we then went back to the MISTI clinic so that Charlie could get his first dose of Chemotherapy. We did this weekly for the next 5 months. Thankfully, our story has a happy ending and Charlie just celebrated his 12th birthday on February 15th and we feel very lucky that this was caught and treated as early as it was. Charlie is fun loving, caring and a compassionate boy. He likes to work on his Grandparents farm, play golf and help with his little brother. It is so wonderful to see him grow. He's told me several times that he is going to be a doctor so that other kids won't have to get sick - he's going to save them. I hope all of his dreams come true! After spending as much time as we have around other stricken families of this horrible disease we can say we are very lucky and thankful for our great insurance plan here through work and the wonderful people we work with, but not everyone out there is as lucky as we have been. The cure rate for most childhood cancers is about 80% currently, with the current economy and government cutbacks, most of the groups that are researching these diseases have seen their funding cut because it’s just not considered a “hot button” issue with the voters. So now more than ever if you can help, it can make the most difference. St Baldrick’s is now the leading grass roots organization funding research to cure childhood cancer.