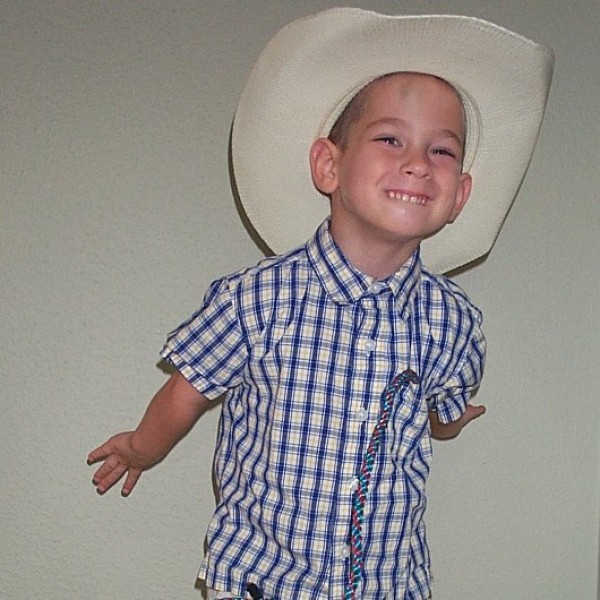 Caleb Joshua Ingram was born on December 6, 2002. He died 1,701 days later, at the age of four, from a rare pediatric brain tumor call Diffuse Intrinsic Pontine Glioma (DIPG). Caleb was a healthy, fun, energetic and loving little boy. He loved fire trucks, Thomas the Train, his John Deere tractor, playing outside, baking with his mom and sister, playing videos with his brother, spending Saturdays with his daddy, singing loudly at church and so much more. The summer of 2006, when Caleb was three, we notice that he had, what we thought and now wish for, was a “Lazy Eye.” We took him to a Pediatric Ophthalmologist. He was diagnosed with Strabismus (“Lazy Eye”). He was prescribed glasses and was to return to the eye doctor for a two month check up in August. Caleb started to stumble, bump into things and drool. We went for his check up and there was something wrong with his right eye. The eye doctor and Caleb’s pediatrician wanted him to have an MRI. On September 21, 2006 our nightmare began. The MRI revealed that Caleb had a mass in his pons and his brain stem. The tumor was causing Caleb’s eye problem. Caleb was diagnosed with DIPG and given 12-15 months to live. He immediately had a shunt put in his head, 31 radiations treatments and monthly trips to the National Institute of Health in Bethesda, MD, where he participated in a drug study. Through it all, the ups and the downs, Caleb never complained. In June of 2007, Caleb’s tumor began to grow again. Ten months after diagnoses, Caleb passed into the waiting arms of Jesus on August 3, 2007, with his family holding him and friends around him. It was peaceful, and HE IS AT PEACE! Though we know Caleb is well, we are in pain here on earth, missing our precious little boy. Caleb is interred at Mt. Olivet Cemetery in Dickinson, Texas. You can read Caleb full story at www.ingram-family.net/caleb