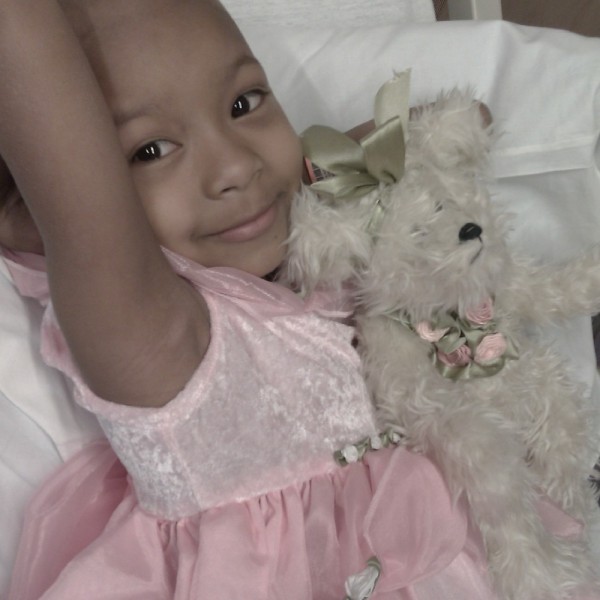 Alexandra was diagnosed with Acute Myeloid Leukemia (AML) in 2008, two weeks before her third birthday. Alexandra's baby sister, Carmen was only 3 months old at the time. Initially, Alexandra spent 6 months in the hospital while baby Carmen was cared for by her grandmother and uncle. Sharon was fortunate at that time to continue to work remotely from the hospital and then from home for an additional 6 months. Alexandra was in remission until May of 2010. Everyone was devastated to find out that the leukemia had returned. Alexandra went through an additional 4 rounds of chemotherapy, then by the grace of God, and an unknown angel who donated bone marrow, on September 10, 2010, Alexandra received a bone marrow transplant. Despite her treatments, Alexandra passed away on April 30, 2011. Sharon and her husband found it difficult to see each other or baby Carmen because they did not have anyone to sit with Alexandra while they spent time with each other or the baby. The sitter service at the hospital only provided coverage for an hour, based upon availability and hospital demand. Because they lived an hour away, they did not use the service too often because that meant that Alexandra would have a different sitter each hour. The stress was almost unbearable. Sharon began to pray about it and ask God how she could help other families not go through what she did. While in the hospital, talking with the numerous families on the cancer floor, Sharon realized that there was a need by many families to have a trusted sitter come in and sit with their ill child in the hospital. Many are single parents and without maintaining their jobs, they eventually lose their sole source of income and their medical insurance. Since 2008, the Sanchez family has been truly blessed by family, friends, strangers, hospital staff and people around the world through prayers, blood drives, car washes, donation buckets, email chains, Facebook updates, etc. They want to give back by making it easier for families to live successfully during and after the effects of long term illness. Alexandra's Helping Hands Foundation, through generous donations, helps families who have children who need long term hospital care, by giving their parents the peace of mind to know that while they are at work or taking care of other children at home, their precious child is being played with, loved and cared for during their hospital stay. Being diagnosed with cancer or other chronic/life threatening diagnosis is not a death sentence, but an opportunity to see God move, in ourselves and others. You can do all things in Christ Jesus! Visit us on the web at www.ahhfi.org. Alexandra was so grateful to be selected as an honor child for her social worker Julie Germann