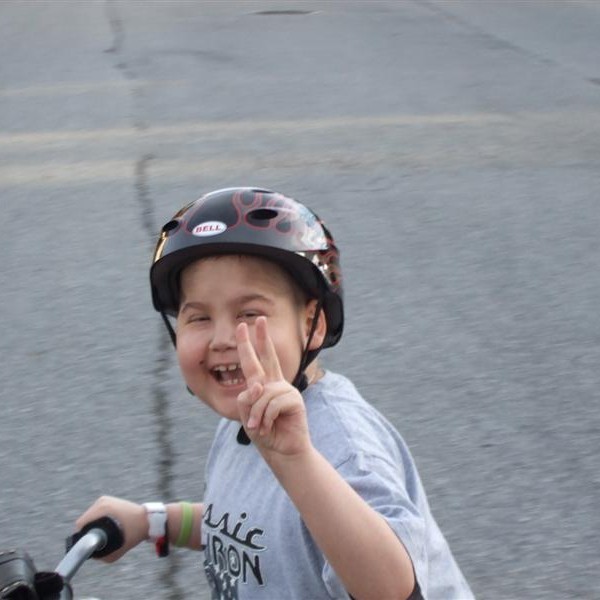 We wanted to tell you a story of bravery. Eli's battle started on November 15, 2007 when he was diagnosed at the age of 6 with (ALL) Acute Lymphoblastic Leukemia, a form of Cancer. Eli reached remission and spent the next two years doing well, until he relapsed in October of 2009 in his right optic nerve. Eli then had eight rounds of radiation to both optic nerves to ensure the Leukemia would not spread or form in the left optic nerve, as well. Eli's battle this time was a very difficult one. Eli lost his electrolyte panel and was rushed to the (PICU) pediatric intensive care unit, where he spent nearly 30 days. During this time, two days before Christmas in 2009, Eli went blind. Eli had what was called posterior reversible encephalopathy syndrome (PRES). Eli's eye sight did return praise our good LORD. Eli did go into remission and was selected to get two umbilical cords instead of just one for his transplant, a stem cell transplant. On April 27, 2010 prior to the transplant, Eli had endured 2 hours and 42 minutes of full-body radiation, and received heavy doses of chemotherapy drugs. Eli had no immune system for 19 days. All of this was to allow his body to accept the new stem cells, Eli then had to have a procedure done, an endoscopy, and during the procedure the doctor perforated his stomach, He then had the battle in the (PICU) once again for losing blood internally and this caused a massive hematoma that closed his stomach off; therefore, he could not eat. Eli was placed on a respirator for 6 days as the machine breathed for him. He then had a 3-hour procedure in which the doctors went in and closed off the bleed sight. Over the next few months, the hematoma went away, another miracle from GOD. He spent 113 days in the hospital during this time. Eli was able to return home and spend Halloween, his big brother Austin’s 14th birthday, Thanksgiving, His 10th birthday with friends, and we spent a special Christmas, and New Year’s at home together. This was the best Christmas we ever had, and we’ll never forget it as long as we live. Eli then relapsed again on January 13, 2011. Eli never once complained during any of the treatments, or procedures. Eli had a prayer list and would pray for others at night. When Eli was finished praying one night we asked him if he remembered to pray for himself. Eli would say “I forgot about me.” I also wanted to take a moment to let you know how proud we are of his big brother, Austin. Austin never complained about the time we needed to spend by Eli's side in the hospital. Furthermore, Austin has been able to keep up his grades; he is an A-B student. Eli peacefully went into the open arms of Jesus on January 20, 2011, at 5:15 am.