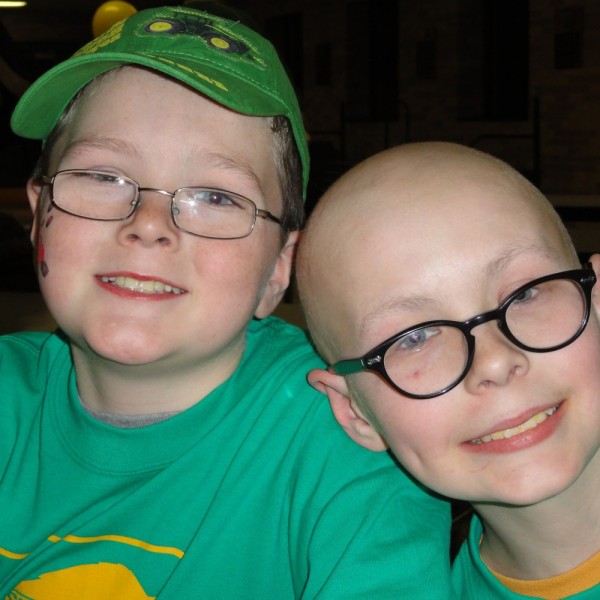 Earl Park, IN, US

Let me introduce you to my two sons Robby and Brendan.   They are two boys, who are two friends and brothers.   They have shared many things over the years…bedrooms, toys, and activities, but recently, they have shared something I wish neither ever had to have ownership of….childhood cancer.   Brendan was diagnosed with ALL (leukemia) at age 5 in January 2007.  A simple blood test at a visit to the pediatrician in preparation for Kindergarten revealed a sign of something “not quite right” with his white blood cells.  Four months later, the “mystery” revealed itself as cancer.  On Good Friday of April 2010, Brendan took his last dose of chemotherapy!  When offered Tylenol/ Motrin for pain, a brother asked “Wait a minute, why can he suddenly have Tylenol”.  Before I could answer, Brendan replied, “Because I’m a free boy”!!!  Yes, he is cancer free!   Two weeks later, I received a call at work that his brother, Robby, had broken his leg at school after jumping over a vaulting horse.  It was Robby’s 12th Birthday.  In the ER I was shown an x-ray that showed a “spot” on his bone.  I was told that 99% of the time these spots were just a bone aneurism and nothing to worry about.  But a few days later, a pathology report said something different.  Within a week, I was told that Robby had Osteosarcoma (a bone cancer) in his left femur.  Since then, he has had 16 rounds of chemo and a surgery to remove the cancer and replace the bone with a growing prosthetic rod!  He is currently only two rounds away from being finished with chemotherapy!   Both boys are just that…BOYS…cancer is a part of them, but it is not “who” they are.  They like tractors, farms, mowing lawns, cars, school (lunch and recess), as well as playing with their other brothers (Jeffrey, Andrew, and David).  All of this is because of their wonderful doctors, nurses, and caregivers here in Chicago and the prayers of loved ones and friends!