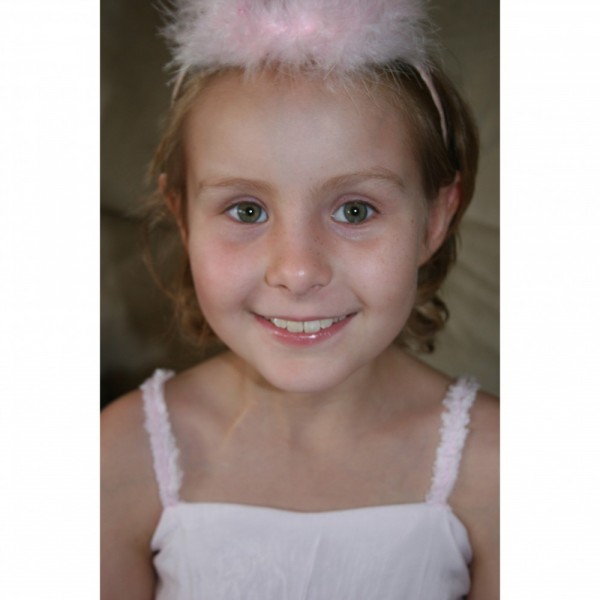 This is our sweet daughter Haley after her second brain surgery and battling cancer. She has a port in place under the skin on her chest and a shunt in her brain for the injections of chemotherapy she endured for five years, up until the last months of her life. She had Medulloblastoma; brain and spinal cord cancer. What amazes me about her is that she was so happy and positive. She was appreciative of every moment and every person who crossed her path. It was awful though. After her brain surgery, we watched in horror as within hours she lost her ability to move and speak; Posterior fossa syndrome. That night she suffered a stroke in my arms. She could not move, swallow or communicate, but she could scream. It broke our hearts. After a few weeks at Tripler the decision was made to airlift her to LA Children’s Hospital for intensive rehabilitation and to start radiation and chemotherapy. She was in-patient for 4 months. This little girl, at 5 years old, began a long and very hard battle for her life. She was scared, determined and she worked incredibly hard. With the help of intensive therapy she learned to move again and to speak. Haley survived her the first year and a half of the hardest chemotherapy you could imagine and was declared cancer free. Cancer free!!!!! We celebrated and cried. 6 months later, the cancer crept back into her spine and she relapsed. At her moment of relapse we knew Haley would lose her life. There is no cure for relapsed Medulloblastoma. After a year and a half of horror... paralysis, chemotherapy, radiation and brain surgery.... we only had 6 months of hope... and then our little girl continued to suffer. No child should ever have to suffer like she did, like all kids fighting cancer. Haley had another brain surgery resulting in epilepsy and constant chemotherapy. Despite this, she epitomized love. She was sweet, empathetic and gave the biggest hugs. . She made the best of her life, and she made our lives. With current drugs and treatments we were only given one chance to save her life. The treatment was unfathomable: brain surgery, radiation to her brain and spine and one and a half years of the hardest chemotherapy. She survived this horrific treatment and she was permanently disabled. The brain damage from her surgery and the 30 days of radiation to her brain caused a life-long decline in IQ. After this one chance for life, there was no hope. We were devastated. Haley lived the next three years of her short life on experimental chemotherapy. It gave her a chance to grow up. It had less side effects and her quality of life was improved. As a family, we looked for a way to save her, and we found St Baldrick's. Through them we worked  hard to raise money for childhood cancer research to fund new research that could save her life. Every year our family continues to support St Baldrick's in Hawaii. Haley helped shave many heads at this event. She loved the joy that came in knowing that this simple act of giving, shaving your head, saves lives. It saves the little lives of her friends and it makes living their lives better. St Baldrick's raises money for better treatment, less disabled kids, less side effects and more kids who make it to the next year. Life with our daughter was making the most of every minute we had been given.  Thank you for those extra 5 years we had with our daughter. Your support for new research allowed us precious time with her. It allowed us to have our family just that bit longer. There is no way to really say thank you for that, but THANK YOU. Haley found fun in everything she did and everything new she could do. Her biggest loves were stuffed animals, her dog Lovey and her friends and family. She was grateful, as we all are, for the amazing people who carried her and us. Thank you for helping these kids who fight cancer. Over 96% of the US National Cancer Institute's cancer research budget is designated for  adult cancers. Less than 4% is allocated to childhood cancers. LESS THAN 4%. Children suffer cancers that are different, more aggressive and poorly researched.  We believe that our kids are worth MORE THAN 4. Without sufficient funding it's up to us, one donation at a time, to fund childhood cancer research. Thanks to St Baldrick's, we've got this. And thanks to you. Thank you for your support for childhood cancer research.