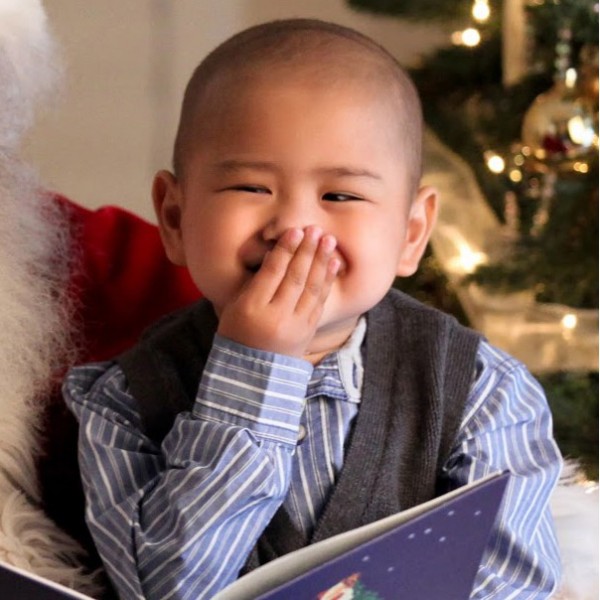 One of five St. Baldrick's Foundation 2014 Ambassadors Read more of Alan's story on our blog. They called him Mr. Cheeks for the frequent, easy smiles that stretched across his face. Alan was diagnosed with a rare sarcoma in his hip at 17 months old, but for the five short years he graced this earth, Alan was pure joy. He was such an active, engaged child that it was hard to keep him occupied during long hospital stays. “Alan was unstoppable,” his mom says. He learned to walk three times in his short life: as a toddler, as his hip recovered from the tumor damage, and again after having his hip removed. Alan loved monochromatic animals – penguins, zebras and pandas. He loved reading, learning, and exploring. But most of all, Alan loved numbers – counting them, adding them, punching them into his calculator, pressing them on the elevator. Alan couldn’t wait to go to school like his big brother and biggest hero, Kevin. When his first day of preschool finally arrived, he cried when it was time to go home. Alan passed away on January 17, 2013, after battling cancer for most of his life. Alan’s parents vowed to continue the fight through the Hero Fund they established at St. Baldrick’s in his name. Alan’s life was far too short, but his bright light shines on through the countless lives he touched, in the research for a cure that is funded in his memory, and in the hope that the research gives to the children and families who follow in his footsteps. __________ Alan's story, as written by his family: You can keep up with Alan's story on his blog... mistercheeks.blogspot.com Alan was an impish monkey with a lot of personality. Keeping such an active boy entertained during chemo was a huge challenge and he liked to boss us around just to keep us on our toes. Alan loved letters, monochromatic animals (Pandas, Zebras, and Penguins), Sponge Bob, the games (and tickets) at Chuck E. Cheese, watching the donuts being made at Kripsy Kreme (and then eating them). But most of all he loved numbers. Reading them, counting with them, typing them, adding them. He was so brilliant with numbers that when we knew we would most probably lose him, we ached knowing that he would never be able to reach his full potential. Alan was diagnosed with a sarcoma in his right hip in the Spring 2009 at the age of 17 months. After a summer of chemo treatments and a tumor resection in January 2010, we thought we had it licked. We had a few carefree months, then we found out in May that the tumor had returned. Alan went through another summer of chemotherapy and then we went ahead with a hemipelvectomy with Dr. Valerae Lewis at MD Anderson in December 2010. After a 17+ hour surgery and 3 weeks in the ICU, Alan spent almost three months in a spica hip cast. He didn't let the cast slow him down for too long, and near the end, he was pretty mobile despite all the fiberglass he was hauling around. Alan made the long recovery from the surgery well, learning to walk again and getting through the post-op chemo. Unfortunately, the tumor broke through the chemo in December 2011. We spent the spring of 2012 trying a variety of salvage therapies, including different chemotherapy regimens in San Antonio and cyro-ablation at MD Anderson. By the end of June, we were back at MD Anderson with a still-growing tumor and Alan was admitted to the hospital because the tumor was causing a life-threatening intestinal blockage. The doctors quickly put him through an intense round of radiation therapy to give us more time to find another treatment. Unfortunately, a CAT scan at the beginning of September showed that the tumor was still growing despite all the treatments the doctors could come up with. We returned to San Antonio so Alan could be more comfortable in home health care. We spent the time since returning home trying to live life to the fullest and making as many memories as we could. After four months of seizing every day, every memory, every laugh, smile, and cuddle, Alan slipped away from us on January 17, 2013 at the age of five. We lost Alan because our doctors, despite every effort, simply didn't have enough answers. While Alan was in treatment, we had the motto “Fight’s on!”. Alan fought for so long, from such an early age, that fighting cancer was virtually all knew. Now that he is gone, we have to continue to fight childhood cancer in his name.