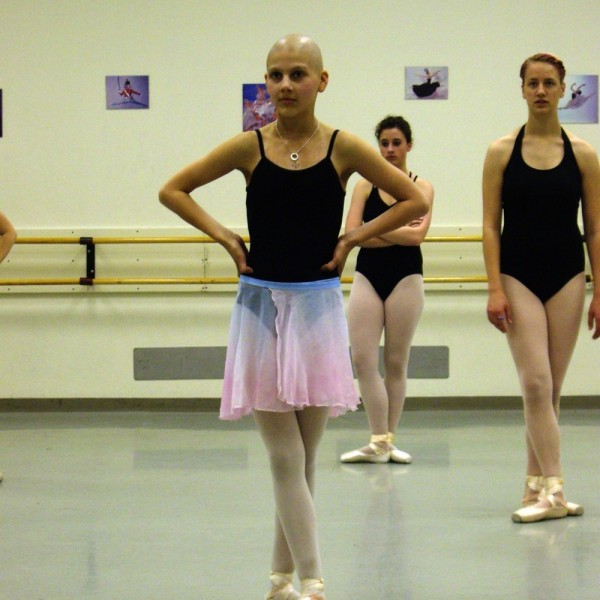 On December 18, 2007, at age thirteen, I was diagnosed with Hodgkin lymphoma after months of searching for what was making me so ill. A giant mass sat in my chest cavity, slowly suffocating me and cutting off all circulation. Two days after Christmas, I began my first of four rounds of chemotherapy, followed by three weeks of daily radiation. During this time, few situations were too serious to make light of or laugh at, and some of my greatest laughs were at a time when, truly, I shouldn’t have been laughing. In addition to laughter, dance proved to be therapeutic. Having danced since age 3, I was passionate about continuing my classes when I was well enough. Two days after I finished treatment, on May 8th 2008, I danced in my Spring Recital. Although I was thrilled to be “done” with everything, I soon realized that recovery was just as difficult as treatment itself. Struggling with post-treatment effects, I sunk into depression and the funny, loving person I had been gradually disintegrated. Bad associations with food and horrible digestive problems morphed into a life-threatening eating disorder that destroyed me physically, spiritually, and emotionally. It was at this time that I began writing. I never began writing with an end goal in my mind; I just wrote-wrote about what happened to me and how I felt at the time. I was able to evoke and dissect what I had experienced, put it in context, and place it where it fit in my life. It was not until I had filled many spiral notebooks that I realized that I had something going. My health steadily improved. By August 2009, I was on the road to recovery and I had written a 304-page book describing my experience before, during, and after cancer. Discovering that my story could inspire, heal, touch, and help many people, it became extremely meaningful and rewarding for me to share my story. On October 30, 2009, the first edition of my book, Grace, was published. Before long, Grace was accepted by Greenleaf Book Group, and my mom and I began working on the second edition, Grace: A Child’s Intimate Journey Through Cancer and Recovery. I feel blessed to be able to share my story, and I am dedicated to the fight against cancer and helping those affected by this terrible disease. I am now a healthy sixteen year-old high school junior who dances six days a week. I plan to go into the medical field and continue dancing and writing. Cancer has brought me even closer to God and has given me an opportunity to make a difference in this beautiful, yet pained, thing called life…and I am very thankful.