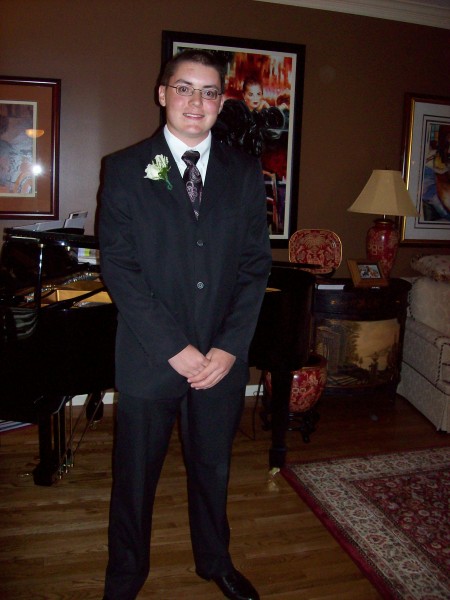 Augustine started getting headaches in August of 2009 around the start of school. We thought it was the stress of school, starting to weight lift in the early morning hours for swimming etc. But on September 23rd, he had his first MRI only to be followed the next day with the news of a brain tumor at the top of his brainstem. The first news we received was very grim, a brainstem glioma. The doctor recommended putting in a shunt to relieve the pressure in his brain. Since our first doctor did not get a biopsy of the tumor when he put in the shunt, we went looking for second and third opinions. Augustine felt the most comfortable with the doctors in Rochester so we transferred his care. He ended up in three more surgeries within the next 2 months to remove the shunt and get biopsies of the tumor (First one came back inconclusive). The day after Thanksgiving, we received a call from our doctor that we were very thankful to receive. They finally got a good biopsy and the tumor was a germinoma. We were so thankful to God for the news that it was indeed NOT a glioma! No one ever wants a tumor, but the doctor told us if you had to pick one this would be it. Now, we just needed to meet with the various doctors and decide on a plan and get started with treatments. We opted to take chemo treatments close to home. This allowed Augustine to stay in school and start treatments right after school on Friday. It was a three day cycle, so he could complete over the weekend. He started chemo in Dec. and had a second treatment in Jan. On Jan. 19th we were back in Rochester for MRI’s to see how the tumor looked. Our doctor hugged us as she came into the room. The tumor had responded to the chemo and it was gone! We were still scheduled to go through radiation, but did not have to take the additional two rounds of chemo. We spent the month of February at the Ronald McDonald House. Augustine had both the brain and spine radiated. He started radiation only days before his 16th birthday. I remember that long drive home on his special day. He was so sick and as a Mom I wished I could take that pain from him. We got through that month. It was hard, but looking back I feel really blessed to have spent that month with my son. In March, after returning we were honored to be part of the St. Baldrick’s event in West Des Moines. Scott McEntee, a swimming dad, shaved his head in Augustine’s honor. It truly was an honor for our entire family! At the end of May we had another round of tests. The tumor was definitely gone and all the scans looked great. He finished his sophomore year at school which was something that didn’t seem possible in September. Here is a short description about our son. Augustine is the oldest of three children. He has two sisters Kaliana, 14 and Cecilia, 8. Augustine is a very studious and hard working junior. He loves school and enjoys the challenges of AP classes. AP Physics is his favorite right now! In his free time, he enjoys watching NFL football especially the Chicago Bears. Augustine swims for the Dowling Catholic Maroons and also enjoys high school football games. Board games such as the Settlers of Catan, Axis and Allies and Monopoly are favorites. His sister, Cecilia, says “He loves any LONG board game!” Augustine also enjoys volunteering, especially when it involves children. Some of his favorites include: Sunday School assistant teacher for several years, Vacation Bible School, Little Hands on the Farm and the Lion’s Club Spin Art Booth (both at the IA State Fair) and this past summer when he had the opportunity to be a Leader in Training for the Children’s Cancer Connection Sibling Camp.