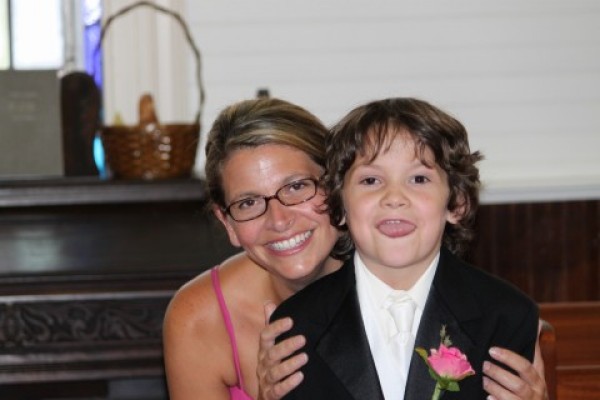 Cooper was a diagnosed with Retinoblastoma when he was almost 8 months old, July 30, 2004. There were only 7 days between the initial diagnosis and the day his eye was removed. It was quite the world wind week! We had amazing doctors and aside from the drive from Philadelphia and the procedure being outpatient, it was manageable. We were thankful that he did not need chemotherapy or radiation. We were also grateful that this was a pediatric cancer that was 100% curable. After 6 weeks of healing, we drove back to Philly for Cooper to get prosthesis. Joe LeGrande was amazing!! You couldn't even tell that Coop had a 'magic eye', it looked just as big and bright as his seeing eye. In October, we had an "Eye-Scream" party to celebrate his magic eye. That Christmas, someone said to me "your son has the most beautiful brown eyes", I cried. Then told her how much that statement meant and shared what he had been through. Cooper was hospitalized twice the following year, once on his first birthday and once at 14 months for chronic sinus infections. After working with an immunologist, we got his allergies and sinus issues under control, which helped tremendously. Since then, he has had no real issues. Until he was 2 years-old, he had eye exams (under anesthesia) every 3months to check for signs of tumors in his left eye. Then it moved to 4 months, then 6 months. Before Cooper turned 5, Dr. Sanborn suggested we try office exams. He did great! He was so excited not to have the "bubble gum" (gas) anymore that he was a very big boy in the office. In April, Cooper has his last surgery to have a larger implant placed in his eye socket. Dr. Purgeson was able to place an adult size implant and was happy to report he should not have to have the surgery again. It was a rough week, but many boxes of legos and 1000 books got us through. Cooper got his third magic eye in June and is a happy healthy almost 7 year old boy. We were told before his first surgery that there would be two things he could not do, play tennis and join the military. This year, Cooper decide to trade guitar lessons for tennis lessons and he's doing great! He wears glasses, just for safety and you would never know he was any different. Just the other week I had the following conversation with Coop: Cooper: Mom, why to do I have a magic eye? Me: Well, you had cancer when you were a baby and the doctors had to remove your eye. Joe, Dave's brother (we go to Chesapeake now for his prosthesis), made your magic eye to keep you safe. Cooper: Well, some girls at school were worried about me and I was telling them about it. Me: Oh, were you ok talking about it... Cooper: yeah! Do people die from cancer? Me: yes, sometimes they do. But you didn't, you were not that sick. All of the cancer was in your eye so the doctor was able to remove it all. Cooper: So I'm a really special boy huh mom.... Me: yes cooper... you are a very special boy!