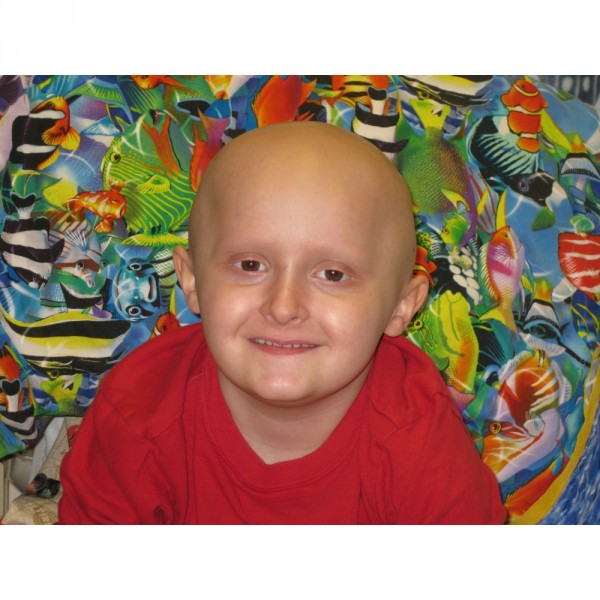 No evidence of disease {NOD}

One week we were at a water park playing and 2 weeks later we were admitted to the hospital with a cancer diagnosis. Our lives were forever changed. Cayden was 4 and diagnosed with ERMS Rhabdomyosarcoma in his sinus area, a very large tumor. He had 43 weeks of chemo and 6 weeks of proton radiation. He lost his hair 3 weeks after his chemo started and we had to cover all the mirrors up in the house because he wanted his hair back, and couldn't stand to see himself. I, his mother was a hairdresser ,so even after he lost his hair I had to blowdry his head every night for a while, like he still had hair. Cayden was the happiest child and when this happened it traumatized him. It took him longer to adjust to our new life than some other children I met. He did finally come around and we recently finished his protocol, so his smile is back these days. Cayden's tumor did not shrink that much and he has a mass left that they say will probably always be there, but they believe it is dead scar tissue and as long as it doesn't grow they are happy. He will have scans every 3 months for a while, and the rest of his life they will scan him . It is not easy living in fear, because so many do not make it, and you pray he does. You never realize how very many sick kids there are in that other life I lived, but though Childhood cancer is suppose to be rare, there are so many kids going through unbelievable things for a chance to walk, laugh, and be a child again. It puts so many things in prospective, I'm trying to learn to have fun today, because tomorrow will be a gift. Cayden loves fish and sea life and that is all he plays with, so we hope to be swimming, fishing ,and sliding down slides again real soon. He has some neuropathy from the chemo drugs,and needs some physical therapy which we hope to start soon. Right now he is praying his hair comes back just like it was, I hope he gets his wish, and a lifetime of happiness. May God Bless all these precious children, and find cures for these awful diseases I pray. He lost his fishing buddy his "Papa" pretty suddenly to cancer while he was in treatment, and I lost my hero. His Daddy is going to have to learn to fish. He wants to catch a hammerhead. Thanks to all for caring.