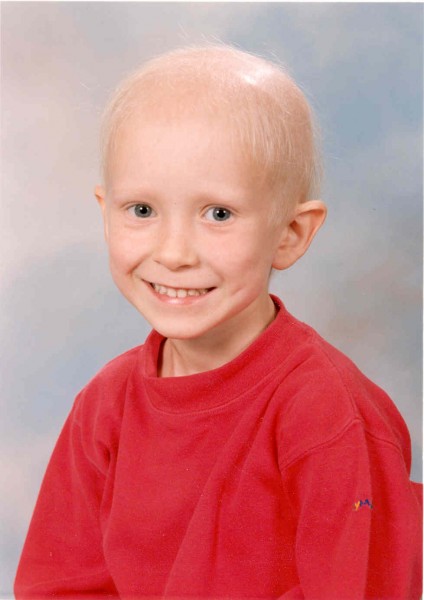 While little Zack, the only child of Sandy and Chris Willson-White, was going through his cancer treatments, he had more than enough toys to distract him. His mother and father had met while working for Mattel Toys, and the company -- along with several other toy and novelty companies -- sent the boy every imaginable product to ease his pain. He had trains, stuffed koalas and kangaroos from Mattel Australia, a huge Care Bear, Batman toys, and his favorite, a Power Wheels Suzuki. Zack was diagnosed at the age of 4½ with Wilms' tumor. Chris Willson-White had just been transferred to the Netherlands, as VP Marketing for Mattel Europe, and his wife noticed that during the move their son was very irritable. They considered returning to the U.S. for treatment after learning of their son's cancer, but a Long Beach-based Children's Oncology Group physician reviewed the boy's proposed Dutch protocol, and assured them he would receive top notch care in Rotterdam. He recommended that Zack be treated at the Sophia Kinderziekenhuis, a hospital attached to Erasmus University. Zack's first surgery took six hours, and involved the removal of a 4 ½-pound tumor that had attached itself to many organs. In addition, he required the removal of one kidney, many lymph nodes, and ten inches of intestine, resulting in the need for a stoma for a period of time. But the cancer had already spread to both lungs. "He had fourth stage. We knew we were up against a big challenge," says Sandy. Looking back on those challenging two years, his parents now concentrate on remembering the small miracles that happened along the way. While Zack was having radiation treatments, Sandy told members of her congregation at The American Protestant Church of The Hague, "Please pray that he keeps his appetite and that way he will feel better and be more energized, and be able to be a kid." The miracle was that despite the radiologists' predictions that his appetite would disappear, it did the opposite, it improved. Soon he was eating again. The family faxed updates to 150 friends around the world. But the news kept getting worse, not better. In November of 1993, after six additional operations, and chemotherapy and radiation thereafter, his tumors were inoperable and unresponsive to treatment. His medical team came to the conclusion that further treatment would be to no avail. His parents brought him back to the United States to fulfill Zack's request: "I want to be with my family!" He ended his days with his parents, grandparents, cousins, and other family members. "We wanted him to have a good Christmas," Sandy says. And he did, including, of course, an avalanche of toys. The one he liked the best? A $10 Jurassic Park tent that he put up in his grandparents' bedroom. When he died, a month after Christmas, his mother and father donated his corneas (the only organs that could be given to help others) to the Doheny Eye Institute. They had already started the process of setting up a memorial fund at CureSearch NCCF. They believed that this would help to ease the pain, not just for themselves, but also for the many people around the world who had supported Zack and his family throughout his ordeal. To raise muvh needed funds for childhood cancer research, Chris & Sandy are organizing their Fifth annual St. Baldrick's head-shaving event, where Sandy even has her head shaved for the cause. Sandy and Chris Willson-White later moved back to the United States, where Chris now serves as Vice President of International Marketing for Mattel. A woman of strong religious faith, Sandy says now, ten years later, "I can't allow myself to cry any more than a minute or two. And I don't cry every day. My faith keeps me strong." Sandy and her British husband are "best friends," she says, and she adds that the painful experience, "made us even closer." A couple's marriage is tested when a child has cancer. Sandy advises, "Your child needs parents who are strong and needs to know that his or her parents will be there. You have to be a team, a unit, or you're doing a disservice to your sick child."