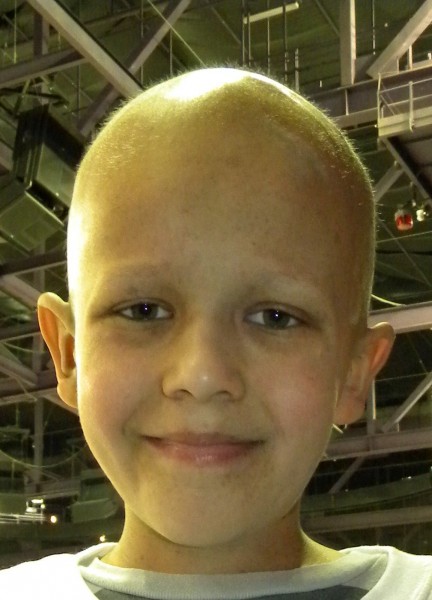 Dillon started having headaches and morning vomiting on June 25, 2009, it just so happened that he had routine check up that day with his doctor who said that it was probably a gasto stomach virus that was going around, and that it should be gone in three days or so. I gave it five then asked that his blood sugar be tested thinking that maybe he had diabetes. The doc that seen him on July 2nd said that his blood work came back normal and sent us to see a nero doc. The nero doc said that it was his migraines and that he would like an MRI and that he would put in the request with our insurance. I did not agree with what he had said. On July 3rd I took him to the ER on Nellis AFB and asked that an MRI be done due to the holiday weekend the best they could do was a CT scan. When the scan came back they seen a tumor so they sent us to Sunrise Childrens Hospital where he was admitted and would get an MRI the next morning. The morning of the 4th of July the MRI confirmed that there was a tumor in the 4th ventricle and that he would need surgery. His surgery was done on the 5th and after about 8 and half hours we were told that it was a medulloblas​toma which is a type of brain cancer. Later in the week we were told that he would have to have radiation and chemotherap​y. He went through five days a week for six weeks of radiation treatment, then started chemo. His chemo is 9 cycles long with each cycle lasting 5 to 6 weeks. Before he was done with radiation he had lost his hair but he did not care. He said that girls dig bald heads. After radiation he started getting his hair back and he kept it for almost two and a half months, and now he is bald again. He has good and bad days more good than bad. His main side effect right now is that he is tired most of the time, but he still goes to school all the time and does not let it stop him from doing things that he wants to do. His spirits are so awesome and has a great attitude about it. He has said from day one that he found out that he was going to kick cancers butt. Yes he has his days were he will question why do people get cancer or why there is not a cure or why kids but the one thing he has never asked is why him... He always says that God has a reason why and that he does not know why and that he might never know why. I am so glad that he has not let it get him down and that he is the same caring loving Dillon that he has always been. He still never wants to put someone out by them doing something for them and he hates it when he is sick that someone has to take care of him.