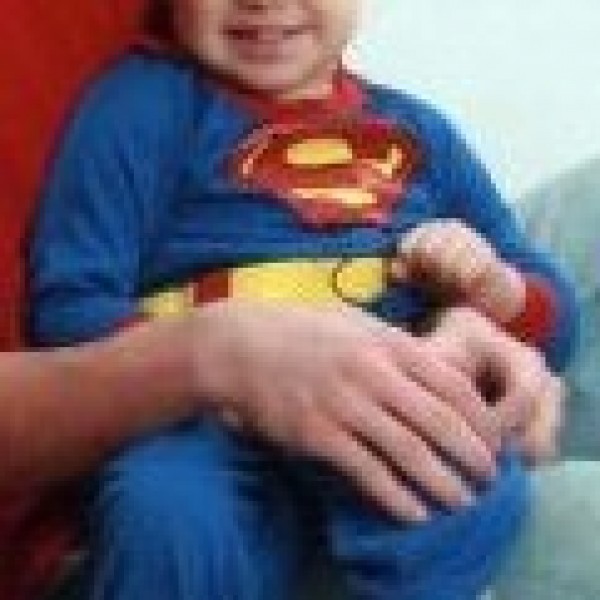 Jake is the youngest of 5 siblings. He has a big sister and three big brothers. He was just under 2 years old when he complained of his head hurting him. We thought nothing of it at first, but he would wake up at night sometimes screaming and was totally inconsolable. We decided to pay a visit to our pediatrician who in turn weighed on the sign of caution and had us get an MRI at Children's Hospital. That was in December of 2008. The MRI was clean and the headaches didn't seem as severe so we wrote it off to sinus or something else. As time went on, Jake progressed as a normal toddler and hit all of the milestones of a 2 year old. He turned 2 in March of 2009. He began to walk with some unsteadiness and it just seemed to be getting worse. We once again took him to our pediatrician who asked me to have him walk for her. I was expecting her to tell me he had an inner ear infection and that was why he was off balance in his gait. But when Jake hesitantly walked for her, my pediatricians mouth dropped and I saw a look in her eye that scared me to death. We went back into the examination room and she said she was going to call Children's neurologist to see about getting us in to see them in the next few days. She came back in the room and said she would give me enough time to pack but then I needed to get Jake to the Emergency Room at Children's. At that point my world just stopped. We had a CT Scan which showed a Mass and then an MRI the next morning which showed the mass to be a tumor. Once operated on it was found to be stage 4 Desmoplstic Medullablastoma--a brain tumor located near his cerebellum and his brain stem. The next thing I knew our baby was on a table being wheeled away from us to have this tumor removed. It was removed and they thought they were successful in removing all of the tumor. He then went through a protocol of chemotherapy for 9 weeks. At that end of this 9 weeks he was given a MRI which unfortunately showed that the tumor had grown back. He was too young of a candidate for radiation therapy because of his age. They typically like to wait until a child is 3 year old or older to do radiation therapy because they feel not all of the brain has been developed until that age. At this point we had no choice. Since the tumor grew back so rapidly and they realized that this particular cancer was that of an aggressive nature they did a second surgery to remove as much of the tumor as possible but since it was so close to his brain stem they couldn't get it all this time. Our only option at this point was radiation. We went through 30 radiation treatments which was pretty rough on him but he made it through as he always has. The MRI after the radiation showed no physical sign of the tumor. His next step to be sure we destroy this aggressive cancer was to go through another chemo treatment but with a lot stronger medications. He also needed a bone marrow transplant. We had his own stem cells harvested to use in the bone marrow transplant that would follow the chemo regiment. That is where we stand now. We are in Childrens Hospital undergoing the chemo part of the treatment. Been pretty rough on him but he is such a strong little guy, he amazes us everyday. He will have his bone marrow transplant using his harvested stem cells on Tues, March 2nd, which happens to be his birthday. We never imagined we would have been put on this journey but now that we have, we have faced it with faith and perseverance to fight this cancer and not allow it to take our little guy. He was always so full of life and always trying to keep up with his older brothers and had a smile that could melt anyone's heart. He continues to smile through all of this and amazes us on a daily basis as to how much he can take and yet can look up at me and say "I Love you MaMa" and get back to trying to keep up with his brothers and sister. It has been a struggle which has tested us in so many ways and yet he continues to persevere and fight this fight that he doesn't truly understand. We hope this will be the last leg of our journey and that the outcome will be that we kicked this cancers butt and yet we won't know that for sure for quite a while. We have learned to take one breath at a time, one step at a time and one triumph at a time.