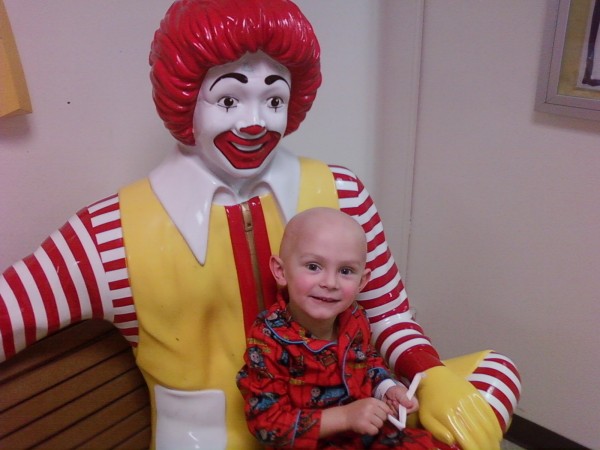 Peyton is a very wonderfully courageous, outgoing, lovable and adventurous little boy. He is 3 yrs old and was diagnosed with Germ Cell Cancer (aka yolk sac or endodermal sinus tumor) not even a month before his 3rd birthday, this past October 2009. His adventure started in August 2009 when he fell of a chair onto his tailbone causing a bump and bruising that continued to get worse instead of better. After 6 wks, Peyton had an ultrasound, the next day an MRI, the next day a Cat scan and the following day they biopsy the large 5 inch tumor that was encompassing his tailbone and impeding on his pelvic organs. They also placed a port in his chest for him to start chemotherapy the following week. They knew that Peyton had cancer before the biopsy because the Cat Scan that he had showed metastasis to his lungs-with 5-10 large tumors in both lungs! Peyton showed no other outward signs of illness except for the unresolved injury to his tailbone. He started chemo the following week just one week before his birthday. He braved his way through with a champions strength, only taking small breaks from playing to "rest". He amazed everyone including mommy and daddy (although we already knew what an awesome kid he was) He endured week long in patient chemo every 2 wks and was just as strong every time. Peyton had surgery in December to remove the remaining tumor around his tailbone and the tailbone itself. He recovered quickly and returned for chemo 2 wks later. He finished his last (hopefully ever) chemo treatment just 1 month ago in January. Although short lived, it was a tremendous adventure and proved how strong not only Peyton is, but our whole family. Peyton has a scan in 2 months to confirm that the cancer is gone-his blood work that contains a "tumor marker" is very low and within a normal acceptable range (which would indicate the treatments were a success) He will then continue to have scans every 3-6 months over the next 5 yrs at which point they can consider him "cured" if he stays cancer free for those 5 yrs! Peyton began to loose his hair 1 wk after his birthday (about 2wks after his treatment) But said it was "ok" because Dragons don't have hair! Peyton LOVES dragons and dinosaurs and named his chemo medicine his "dragon water" which infused to help make him strong enough to "slay" the dragons" his cancer was his dragon to slay! Peyton remains extremely strong and adventurous, making everyone who meets him, amazed and everyone who know's him, proud!