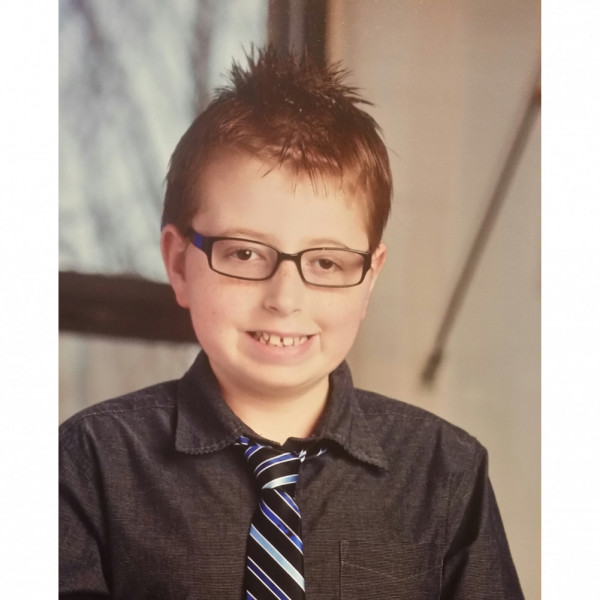 On August 26 2008, at 27 months old Conlan was diagnosed with a Pilocytic Astrocytoma brain tumor. Can you imagine being told that your baby has cancer?? The fear, the anger, the why me, the why him, so may feelings so may emotions. This began the life that we now know. Conlan had surgery which removed 98% of the tumor on August 29th, the day after his brother Cody's 14th birthday. This had to have been the longest scariest 10 hour day of our lives. After surgery we were told everything went well and his neurosurgeon believed what was left would stay dormant for a while possibly even years.Two months after the surgery it was discovered that the tumor was still growing, and the portion that was left had pretty much already doubled in size. Conlan began Chemotherapy on Oct 31, 2008. What a world that you enter when your child has cancer. It becomes your life. Hospital visits/clinic visits sometimes 3, 4 maybe more times a week for hours upon hours at a clip. Days sometimes weeks as inpatient. Sometimes confined in isolation. (I think I could recite the breakfast, lunch, and dinner menu word for word backwards). Words you have never heard~ that you would never dream of being used when referring to your child. Even your child at 3 years old knowing these words?? Blood transfusions (there were many) Platelet transfusions (many many more of these) (never knew these existed always thought platelets were just part of blood didn't know they could be separated). This becomes your life your world revolves around this diagnosis, the hospital, this child, the treatment. At times so sick didn't know if you're baby was even going to make it.. For two years Conlan was treated with chemotherapy. The first treatment, (protocol) was not working so they had to start him on a different protocol which consisted of 4 different chemotherapy drugs. In these two years he was given so many medicines my baby's body was filled with these poisons to control this monster in his head. I gave him some of these at home, had to poison my own child. Do you know how it feels to have to poison your own child? That's what chemo is it's poison, it's evil and most of the chemo meds that children are given are just reduced doses of chemotherapy that were produced for adults! The doctors were pretty much able to control the nausea but he would get so wiped out and fevers...he ran fevers constantly~I think we were at the ER every or every other weekend. Sometimes being admitted, sometimes being sent home only to wonder if we'd be headed back again 24 hrs later. He went through Chemotherapy for 2 years and took his last dose on 8/26/2010. How ironic is that?? Exactly two years after his diagnosis. At this time he added a neurosurgeon, an oncologist, an endocrinologist, an ophthalmologist, to his permanent doctor list~ he has also had to be seen at least once if not a couple times by a infectious disease Dr, a gastroenterologist, a cardiologist, orthopedic Dr, physical therapists (still works with them), and there may have been more. There were so many Dr's appointments which continued well into 3 years~ Conlan developed many issues along with what he was going through with the chemotherapy. Maybe some of it from the chemotherapy. His pituitary gland was rendered non functioning from the pressure of the tumor on it. Which means his body no longer produces any hormones naturally on it's own. From this he developed what's known as adrenal insufficiency (which in itself can be life threatening) diabetes insepidus-(a sodium diabetes) hypothyroidism, growth hormone deficiency, and there will be others as he gets older. He is also completely blind in his left eye and has peripheral vision loss in his right eye. He suffered a minor stroke during the surgery which caused slight hemiparesis on his right side. What a whirlwind of a life. The emotions, the strain on your child, you, your family, the siblings. Oh the siblings..the siblings Conlan has two. Cody and Carissa. Cody is now 23 Carissa is 18. The life that these siblings had to endure while their little brother was the center of everything. I can't imagine what they've been through. I can not imagine what at times has gone through their mind. Despite that they have done well. They are 'super sibs' they have pulled through and done what they have had to do to help their family as well. Now 9 1/2 years later our lives have become a new 'normal' Conlan has been off of treatment for over 7 years, there is very little (if any) tumor remaining. He still has 5 doctors he sees on a regular basis mainly down to every 6,months to yearly. He has a MRI once a year at this point that in itself is very stressful. He is in 5th grade in school and does very well considering. He has a paraprofessional that works with him in school and he is given PT, OT, speech therapy and the board of education school for the blind comes in to visit him and work with him once a month and to see how he's doing. He enjoys life. He loves to color and play outdoors. Not really a big TV child he would rather be doing just about anything than watching TV.