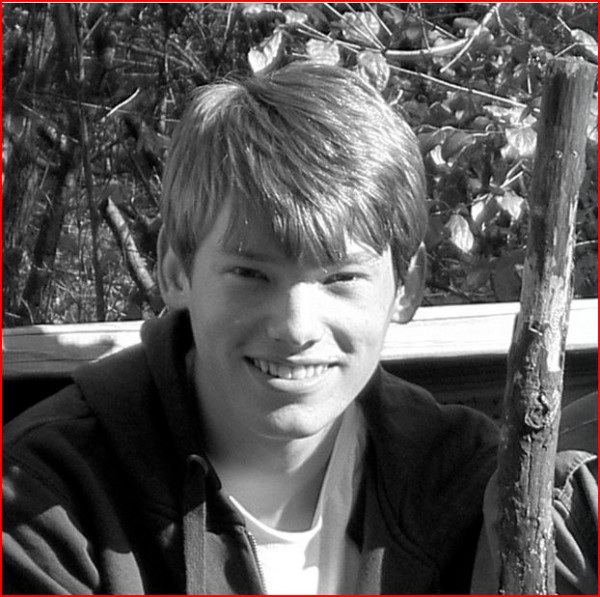 Scott was diagnosed with Ewing's sarcoma, a rare bone and soft tissue cancer, in September, 2008 at the age of 15. He had over 30 tumors located throughout his body when first diagnosed. He immediately started an 8-month plan that included chemotherapy and radiation therapy. He was in the hospital about two weeks each month and was almost always sick, yet he managed to go to school when he was able and he completed his sophomore year. Scott finished his initial treatment plan May, 2009 and was in remission until Christmas morning when he felt a lump on his temple. He had surgery to remove the new tumor and started chemotherapy again in January. Scott will likely be undergoing a high-dose chemotherapy/stem cell transplant procedure later this Spring or Summer where he'll be in the hospital for a couple months. Scott is a quiet and thoughtful young man. He doesn't complain; he doesn't say "it's not fair". He just continues to do the best he can and tries to live as normal a teenage life as possible. He has a younger brother, Jake, and many wonderful friends at school and church who have been by his side every step of the way. Scott enjoys art, music, video games, and Facebook, of course. He also plays bass guitar in the church band. He's an active participant in the church and always does what he can to help others. He has shown all of us what it means to be a hero with his selflessness, courage, and positive attitude. We are very proud of Scott and love him very much. UPDATED 9/20/10: It's been a while since Scott's page has been updated. As I read what I wrote previously I see a lot has changed. Scott never made it to his stem cell transplant procedure. The last round of chemotherapy that came before the stem cell transplant procedure was not successful and doctors told us there was nothing more they could do for Scott. As Scott heard the news, he didn't flinch. He knew he was in God's hands and set about to enjoy the time he had remaining. The Make-a-Wish Foundation put together a party for Scott and about 100 of his closest friends. That's what Scott wanted more than anything, just to spend time with his friends and his family who he loved so much. We also found time to go curling in Green Bay, something Scott became interested in while couped up in the hospital during the last Winter Olympics. We also took several of his friends to the Kalahari Resort where he was able to hang out with friends and enjoy the the water park one last time. Scott was an incredibly brave young man. I never heard him complain about anything ever. After what he went through, I find that to be amazing. Scott also had an unshakable faith in God. I saw God in Scott as he played his bass for the church band on Sunday's. Even though he was almost always in pain, we could see God radiating from Scott's smile. Even in his last hours, when the pain was excruciating, he found occassion to make a joke or two that made things little easier on the rest of us. What an amazing person. He was loved by many and will be dearly missed. We love you Scott. We'll see you again some day, so be ready for a great big hug when we get there. Dad